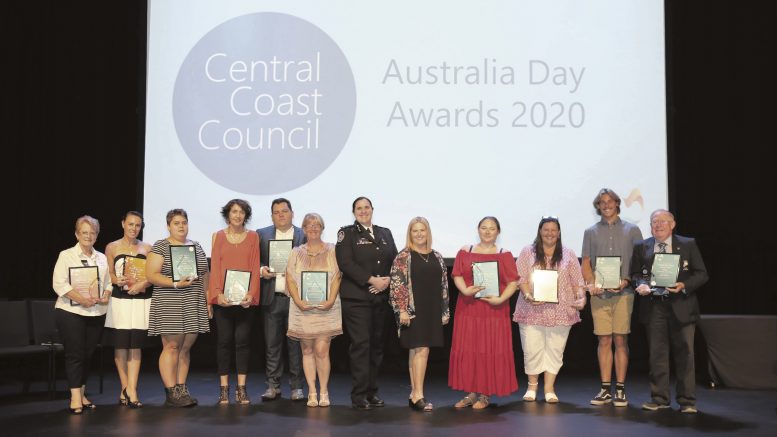 Mayor, Lisa Matthews, said Australia Day was an opportunity to acknowledge extraordinary Australians and in particular members of our own community.
“Australia Day is a time to reflect on our history, to celebrate our achievements and to look to the future of our country,” Cr Matthews said.
“I would like to congratulate each our winners across the eight categories.
“This is an exceptional achievement and the Central Coast is very proud of you.
“Our Citizen of the Year for 2020, Matthew Graham, is a worthy winner of this prestigious award.
“Matthew’s achievements on the world stage speak for themselves, an Olympic silver medallist for Australia in 2018, silver at the World Championships in 2019 and gearing up to represent Australia and the Coast at a third Olympics in 2022.
“Not only does Matthew excel in his chosen field, he has shown that he is a leader who takes the time to give back to his community.
“Matthew often interrupts his own busy training schedule to inspire the next generation, encouraging students to pursue their passion for sport whilst also continuing their journey with education.
“This is a local who practises what he preaches, not only is he at the top of his sport in the world, he is currently completing a double degree in Civil Engineering and Business.”
Joint winners of the Youth of the Year category were Jasmine Shaw and Callum Sutton.
Aged just 19, Shaw is responsible for founding the Central Coast Animal Rescue Network, while Sutton, 18, has succeeded in representing Australia on the world stage in multiple sports while also volunteering as a surf life saver.
Volunteer of the Year was Mark Power, who recently celebrated 50 years of volunteer patrolling on Terrigal Beach.
Highly commended in the same category was Jenny Roberts, who has been volunteering with Girl Guides Australia since 1971, and with Budgewoi Girl Guides since 1987.
Sportsperson of the Year, Katelyn Smith, represented Australia in athletics at the global games in 2019 and has also represented NSW in tenpin bowling.
Environmental Award winner was Cathy Gilmore, who has been rescuing wildlife on the Central Coast for over 28 years, launching Australian Seabird Rescue Central Coast in 2005.
Community Service and Activity winner, Deborah Warwick, was the Gosford Imperial Centre Manager for 19 years and has many ties to the community including an extensive list of voluntary roles across a multitude of organisations.
Business Connecting Communities winner, Sharyn Burgess, created the Community and Business Women’s Network (CBWN) on the Central Coast, aimed at connecting women in business and in the community.
Highly commended in the same category was Kaylene Conway, who created CC365 (Central Coast 365), a platform that allows local Central Coast operators, venues, and businesses to promote their events and services for free.
Joshua Maxwell took out the award for Arts, Culture and Entertainment.
He has dedicated the last 14 years of his life to the Central Coast arts community, co-founding Jopuka Productions, which is now the leading independent youth-arts company on the Central Coast, in 2016.
He is also a big advocate for the LGBTIQA+ community and marriage equality.

God does work in mysterious ways