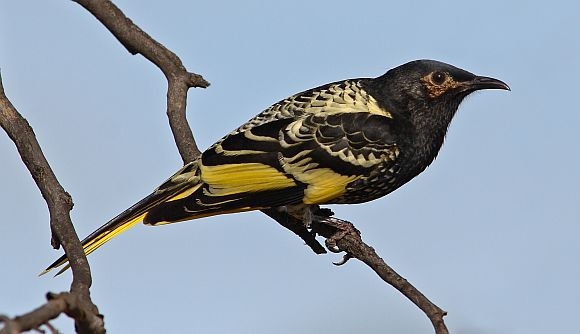 Spare a thought for birds across the state, some have been flying to the Central Coast to escape the fire, smoke and drought, smaller birds are likely not to have escaped the fire and smoke.

Mr Benson is the Central Coast representative for the National Regent Honey-eaters Recovery Team, a bird that is critically endangered with an estimated population of just 400 birds, some of which are thought to have resided in Yengo National Park, a large part of which has been burnt by fires.

Allan is also a committee member of the Central Coast Birders group and calls on residents to do all they can to get to know our feathered friends.

According to Mr Benson, birds not normally seen down by the coast have been spotted by bird enthusiasts from across the region.

“A lot of Top Knot Pigeons that normally live in the rain forest and our Little Lorrekets that nomally reside around Yango camp and Gang Gangs too have been seen by the Coast.” said Benson adding “the Glossy Ibis have also been seen, likely drought refugees from Western NSW wetlands”

“There is also very little food for the birds that feed on insects, many of them appear to have been burnt in these fires. “Everything is struggling at the moment..

The bush fires have been devastating food sources and also the trees birds use for hollows.

“The trees are stressed due to the drought and some are flowering, such as blackbutts and the forest red gums, though this is a stress reaction to the drought and will mean less food later on if significant rains don’t come” said Mr Benson

In the mean time people can help by putting out water dishes in safe places for birds to access, keeping cats inside, reporting injured or distressed birds to WIRES on the Central Coast or Australian Sea Birds Rescue (that has a Central Coast Branch)

Some bird enthusiasts think that small birds such as wrens have difficulty escaping the fire and the smoke associated with fires. There have been reports of birds disorientated in the region.

If you find a bird in distress the best course of action is to gently handle it with a towel and put it in a dark box and transport it a vet. All vets take injured wildlife in without charge.

Central Coast Birders, has about 100 active members and a another 300 casual observers. They run a private Facebook group for local bird enthusiasts, that can be accessed by interested locals on application.

The Central Coast Birders meet on the forth Tuesday of the month at the Progress Association Hall at Tuggerah, 7.30pm. Meetings are open to the public.