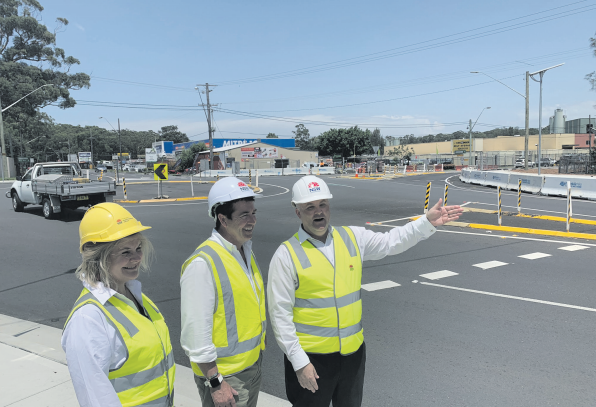 The upgrade of the roundabout at the Empire Bay Dr intersection at Kincumber came a step closer to completion with the flick of a switch this week.

Work to relocate all utilities at the intersection is now complete, paving the way for the final stage of the project, which will see construction of a new lane on the north-western side of the roundabout.

Parliamentary Secretary for the Central Coast and Member for Terrigal, Adam Crouch, said underground work, involving a final power outage followed by the permanent connection of a new high voltage electricity supply to the surrounding area, was now complete.

“This completes all utility relocation as part of this intersection upgrade, which involved electricity, water, sewer, gas and telecommunications services being moved in what was a challenging exercise,” he said.
Crouch said Empire Bay Dr was a pinch point for 25,000 motorists every day.

“In the past we’ve seen traffic build up for as far as five kilometres during morning and afternoon peak hours along Empire Bay Dr,” he said.
“There has already been a significant reduction in queuing since the upgrade began and I know everyone in the Kincumber community is looking forward to the final stage of work getting done.”

Minister for Regional Transport and Roads, Paul Toole, said the State Government had committed $20M for the project.
“Remaining work will include building a new lane, laying a new road surface, stormwater drains, footpaths, and kerb and guttering,” he said.

Transport for NSW worked closely with Central Coast Council and utility providers on the project to ensure that all work was carried out as efficiently as possible with minimal disruption to traffic and local utility users.

Self-publishing the way to go