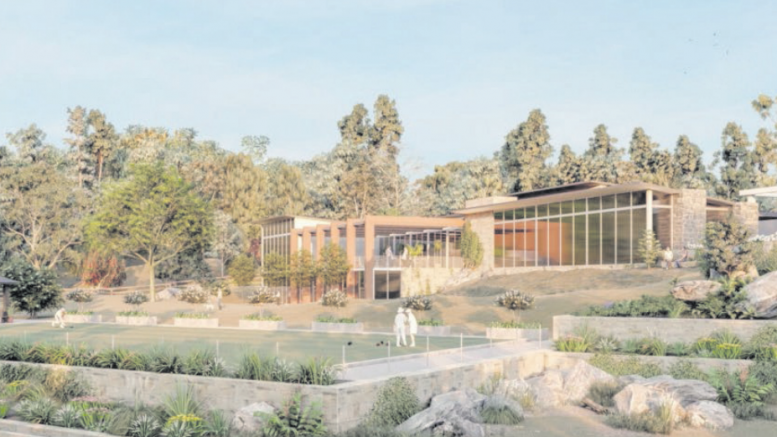 Kincumber and Picketts Valley Community Action Group is ramping up its opposition to an over 50s manufactured home resort and caravan park proposed for the site of the former Bangaloe Stud at Avoca, following lodging of a Development Application (DA) with Central Coast Council in December.

The $19.7M project would see 202 manufactured homes constructed on the 24.12ha site, along with short-term caravan sites and various community buildings and amenities. These would include a sales centre, a clubhouse, an indoor swimming pool, a tennis court, bowling and putting greens, a yoga deck and community gardens.

Choice Living Avoca Developments says the project is consistent with government and industry research identifying a need for a greater housing choice to meet the needs of a growing aged population in the area.

It has been designed, the developer says in documents accompanying the DA, to complement the surrounding area, and has been modelled on an “understated yet contemporary design” respecting the rural residential/ environmental living setting.

“The variety of built forms has been carefully considered to allow the entire development to engage with the existing site conditions, building into, onto, and over land features to allow ease of access around the site while working with the existing lay of the land where possible,” a Statement of Environmental Effects says.

There will be a range of dwelling styles catering to different buyer requirements and providing a varied streetscape, with the manufactured homes to feature high quality materials selected for “durability, low maintenance and compatibility with the site’s natural features”.

But Action Group spokesperson, Graham Murray, says the surrounding area is characterised by rural and semi-rural holdings which form “part of a green tree dominated hinterland that typifies and gives the area its unique quality”. The site also plays an important role in the ecology of the Avoca lagoon catchment, he said.

“Amongst the major concerns (are that) the submission does little to address and explain how developments of this scale are going to contribute to already straining nearby road networks, with traffic delays on Avoca Dr and Scenic Hwy already an everyday commonplace,” he said. “A busy and local crowded shopping centre at Kincumber struggles to provide adequate parking now, let alone with the size of the development adding further to this problem.”

Murray said there were also concerns over access via the residential Picketts Valley Rd and through a recognised green corridor linking Kincumba Mountain reserve to Avoca Lagoon and Bouddi National Park. “Concerns are not just about traffic congestion and notorious black spots, but also for the local fauna that transits through the valley via this corridor, some species of which are listed as ‘vulnerable’ to extinction,” he said.

“Some 491 mature trees are to be removed from the site under the proposal, exposing the development visually to the surrounding residents.”

The group has started a change.org petition to Central Coast Council protesting “massive over-development on the Central Coast”. “The surrounding area is already glutted with these types of high-density housing and we don’t need anymore,” the group’s Facebook page says. “The DA needs to be rejected in all forms as it is not in keeping with the Environmental Living (E4) zoning and rural character of this beautiful area.

“Although the DA status is currently ‘invalid’, we believe this is just a matter of time until the developers, who are based interstate, finalise their proposal. “Construction plans include building a new 8m wide road through bushland to allow heavy construction (12.5m long) and service vehicles to access the building site via Picketts Valley Rd.

“This will create dust, noise and impede traffic flow in the whole area. “This is particularly concerning for the already struggling Avoca Dr, which will be the permanent entrance.

“This mostly untouched rural land forms part of a proven wildlife corridor for the threatened yellow-bellied glider and is a safe refuge for numerous ecological flora and fauna communities. “This mass development will impact the Avoca Lagoon Catchment area because of runoff, thus changing the lagoon’s ecology.

“Such a huge development is indicative of the slow creep and the eventual changing of this semi-rural area forever, to become just another built-up suburb with traffic jams, highdensity housing and concrete. “We are not opposed to sensible, sustainable development on the Central Coast but we strongly believe this proposal to be neither environmentally sustainable nor in any way suitable for a small semi-rural community.”

Shipbuilders heritage walk is on again