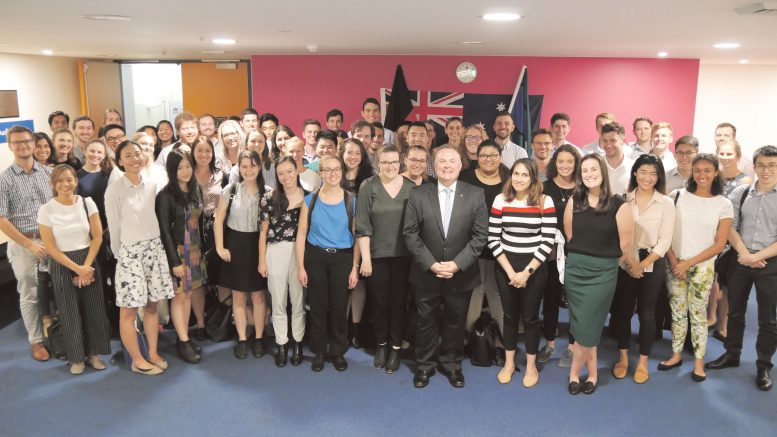 Parliamentary Secretary for the Central Coast, Adam Crouch, with the new interns

More than 60 medical graduates have been added to the staff of Central Coast Local Health District as part of the 2020 annual intake of intern doctors funded by the State Government.

Parliamentary Secretary for the Central Coast, Adam Crouch, said the 68 new intern doctors would perform a vital role at the frontline of the health system.

“These new medical graduates will be based at Gosford and Wyong Hospitals as part of their two-year contract,” Crouch said.
“As the proud husband of a nurse at Gosford Hospital, I know that the medical workforce is the backbone of our health care system.
“I would like to wish our intern doctors every success as they progress their careers.”

Member of the Legislative Council, Taylor Martin, said each medical graduate would benefit from training with experienced medical professionals.

“At the end of their first year, each intern doctor will have obtained general registration with the Medical Board of Australia,” he said.
“The second year focuses on consolidating professional practice and experience.

“Across NSW there are 1,027 intern doctors beginning work this week, which is an increase of 257 positions or 33 per cent since 2011.”
Martin said the government had pledged $2.8B over the next four years to recruit 8,300 additional frontline health workers, including at least 412 on the Central Coast.