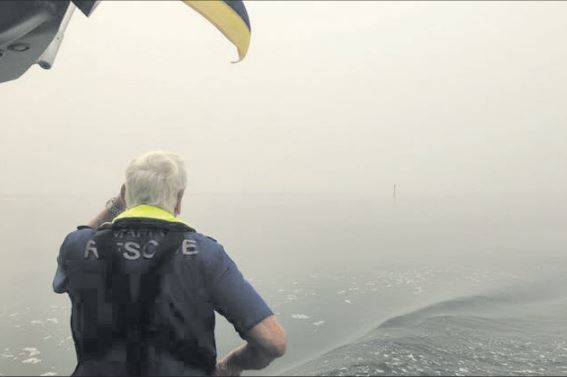 [Woy Woy] A yacht that had run aground due to poor visibility in the smoke haze blanketing the Peninsula from the Gospers Mountain fire has been rescued by Marine Rescue Central Coast.

“At around 10:30am on December 10, our radio operators received a phone call from the skipper of a yacht in distress, ” said unit commander Mr Mark Sheehan. “The skipper advised that they were north of the rip bridge and had run aground on mud and due to the smoke haze.

“The skipper was unable to give any further details, other than they were on the north western side of the bridge, ” Com Sheehan said. Rescue vessel Central Coast 21 was dispatched and commenced the task of locating the vessel in the poor visibility.

After locating the vessel near the Blackwall boat ramp, a towline was established and the yacht freed from the mud. It was then towed to North Cardinal Mark near Paddy’s Channel.

This article appeared first in the Peninsula News print edition 485