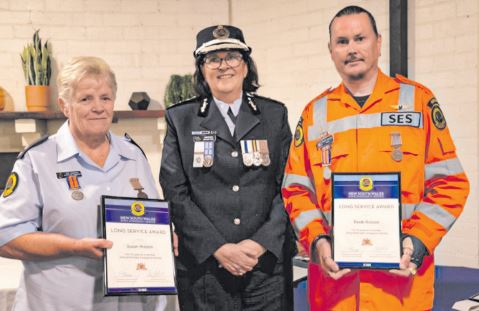 Several Members of the Wyong SES Unit were honoured for their enduring commitment to keeping the community safe at the recent Central Coast SES Awards Night.

During the evening, long service medals were awarded to 11 members, ranging from 25 to five years of service. The evening was a family affair for Wyong members, with the Unit’s mother and son duo of Sue and Reefe Robson, both honoured with medals for their 15 years of service.

“The value of Sue and Reefe to Wyong SES is enormous, ” said Wyong Unit Commander, Matt Le Clerq. “Our organisation relies on the calibre and experience of people like Sue and Reefe to ensure that we have the capability to help the community in time of need, ” he added.

NSW SES Commissioner, Carlene York, presented the Robson’s with their awards, as well as, the other awardees on the night, including those from the Gosford Unit.