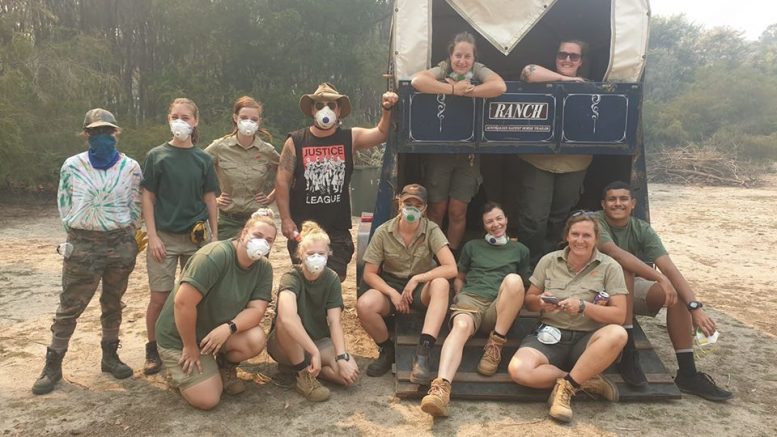 Calga’s Australia Walkabout Wildlife Park remains temporarily closed to the public following the relocation in the last 12 days of most of its 300 animals.

The move is a precaution against the possible spread of the Gospers Mountain fire, burning across 189,890ha in the nearby Wollemi and Yengo National Parks, and the new but even more threatening Three Mile fire only 20km from the sanctuary.

Both fires were reported as “being controlled” on the NSW Rural Fire Service website on November 28, which means that they are not an immediate threat to people. Firefighters are continuing to work on slowing the spread and undertaking direct attack and close containment where possible.

Walkabout Wildlife Park Operations Manager and Owner, Tassin Barnard, said the past two weeks had been an “incredibly intense-time” at the park. “On November 15, we were informed by the RFS that there was a possibility that the fire could reach us within three days, ” she said. “We were told it probably wouldn’t reach us, but it was entirely possible, so we started to look at how we could systematically move our animals to safety in whatever time we had available.

“We appealed to the community and were blown away by the response. “We reached 170,000 people overnight and it was incredibly reassuring to know that so many people were standing by waiting to help us. “

We started with people bringing in transport containers, and while that was going on, we worked out a triage plan. “First we looked at those animals which would be challenging to move but not likely to be stressed by it. “We began by moving around 50 farmyard animals.

“Although we had so many offers to look after them in every situation, from backyards to chook pens and farms made available to us by the public, we decided they needed to be together. “We knew they would feel safer if they stayed together, with the same smells and sounds they were used to. “Getting them off-site and settled and safe took huge pressure off us. ”

Next, Barnard said, the park took stock of the remaining animals, deciding which could be easily and safely moved at the last minute if necessary, which ones would be hard to round up or would need specialised facilities such as kangaroos and emus, and which ones could be severely traumatised by being moved so would have to be relocated with great care, such as the koalas and Tasmanian devils. “Help came in from everywhere, ” she said.

“We had so many offers ranging from warehouses to private homes to other facilities, all on standby in case we needed to move fast. “But we have had more time, so were able to find ideal places with Hanrob Pet Hotels Heathcote, Follyfoot Farm Kindy, Featherdale Wildlife Park, Blackbutt Nature Reserve, and specialised carers within the Wildlife Arc, WIRES and our own Walkabout Park carers and rangers.

“We also had to consider that we had no idea how long the animals would be in their temporary homes, and that when the threat has passed, we must be able to round them up safely and bring them home. “Plus we had to ensure that animals like flying foxes, Tasmanian devils, koalas, wombats and dingoes would be cared for in facilities that meet our required quarantine and other licensing standards. ” All the species are now in suitable accommodation getting the highest standard of care, including snakes, lizards, parrots and frogs.

“Then we turned our thoughts to the animals which would be hardest to capture and would be badly affected by the stress of a move – the kangaroos and emus, ” Barnard said. “We decided to keep them on site unless a move became absolutely necessary. “On November 26, a new fire was started by lightning on our side of the Macdonald River. “This was our trigger to move our most stress-prone animals, like the koalas. “That same day, we successfully moved another 56 animals to safety.

“The fire this side of the river is small, but we have been told that it is expected to grow as it is in bushland that can only be reached by air. “Again, no-one can predict what will happen and it may never reach us, but we have to assume it will, as if we wait until we know for sure, it will be too late. “A flash storm while we were getting ready to move the animals out caused my first moment of panic with gale force wind gusts and lightning and new fires popping up close to the park, but these were quickly contained by the Rural Fire Service (RFS). ” Barnard said the RFS had been “phenomenal”.

“The control rooms are giving us all the information we need about what the fire and the weather and the fire-fighters are doing, so that we can phase implementing our Fire Plan in an orderly way, ” she said. “We understand the worst case albeit very unlikely scenario, and we understand the great range of possibilities in terms of fire speed and direction as it might affect us here at Calga. “As they predicted, the fires that I am starting to think of as ‘pop-up fires’ near us were quickly taken off the map on Tuesday. ” Barnard said that with the smaller fires quickly contained, the new Three Mile fire and the slightly more remote Gospers Mountain fire remained the greater threat.

“Only our kangaroos and emus and wild wildlife remain, ” she said. “We have a clear plan to move the ones we can and safeguard the ones we can’t. “We expect more favourable weather for a few days, so we are continuing to work systematically through our relocation and defence plan. “We are keeping a close eye on the Fires Near Me app, and the weather, while we continually work to make safe zones on site safer, including wet zones. ” Barnard said no thought could yet be given to when the animals might safely return to the park.

“Right now we are making sure the animals, and their temporary carers, are OK and that the animals have everything they need to stay happy as well as healthy. “They need so much more than just food and water. ” she said. “With no ticket sales coming in, we still have to find a way to buy food for the animals, pay the rangers so they can keep looking after the animals both here and in temporary accommodation, cover all of our usual costs, and also cover the costs of relocation and then bringing the animals home. ”

The park has set up a GoFundMe page to help cover expenses during the closure. “This experience has given us a complete and completely doable evacuation strategy and process, ” Barnard said. “We have learned so much through this experience. “We will make being ready part of our normal operations. “We would be naive to believe that we would never have to do it again. “And our orderly relocation model will work for other places too. ”