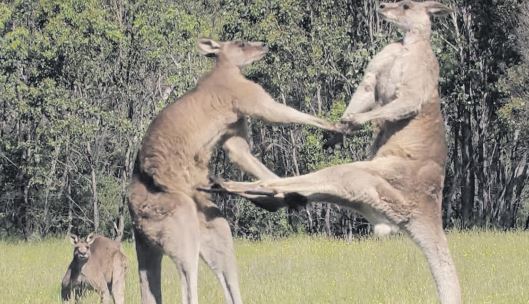 Bruce and Roger sparring at the Australian Reptile Park

Bruce and Roger are usually the best of friends, but a video of the two kangaroos sparring at the Australian Reptile Park gained world-wide attention when it went viral recently.

“Bruce is the dominate male and he’s about 15 years old now, which is getting old for a kangaroo, ” Park general manager, Tim Faulkner, said. “Roger is a younger male coming up through hierarchy to challenge Bruce. “In kangaroo mobs, the dominate male gets breeding rights. “What you seen in the video is completely normal behaviour. ”

Faulkner said the two were normally on friendly terms and could often be seen cuddling together in the main Park area. “Breeding season is happening at the moment and the increased testosterone can be linked to the challenge that was caught on video, ” he said. The footage was taken by a visitor to the Park and sent to 9 News. It attracted 463,000 views on Facebook.