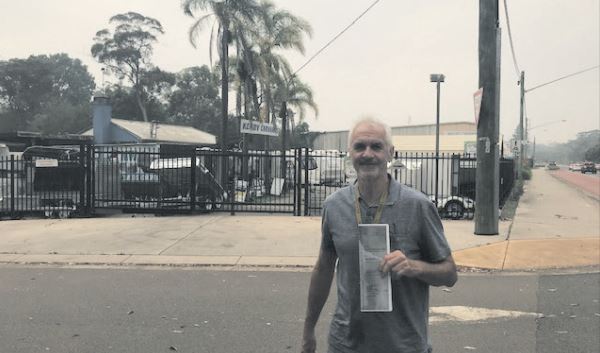 Kendy Caravans and Trailers owner, Kevin Haskell, thinks the new Somersby to Erina Corridor Strategy is a brilliant document but it hasn’t addressed the anomaly facing his business based at Erina.

Mr Haskell spoke at the public forum last Monday night (December 9) before Central Coast Council adopted the new strategy at its last meeting of the year. He was trying to get his business land rezoned to match the adjoining businesses in the area.

Despite paying commercial rates, his land is zoned residential. Mr Haskell said he had been running Kendy caravans and trailers from the site continuously for 36 years, employed ten people, some part time, and turned over more than $2m a year.

He has been trying since 1988 to get the land rezoned. He believes it is a great spot for a tourist activity, situated at the gateway to the Erina Valley, on the corner of the Entrance Rd and Erina Valley Rd.

Council has rejected a number of times his application for rezoning to be the same as adjoining businesses. He said it riled him that councillors spent 20 minutes questioning a previous speaker about a granny flat at Palmdale but his 36 year old problem was barely allowed two minutes.

Speakers normally get three minutes to speak but council cut it back to two minutes last week because more than 20 people had been approved to address councillors. Mr Haskell was the only person to address council on the corridor strategy, but many groups submitted proposals in response to council exhibiting a draft of it.

Other landowners at Erina said the area had more potential than was outlined in the strategy and in response, the council expanded the area to be included in an Erina Structure Plan it will begin work on soon. Submissions were received both for and against future urban release to help meet housing targets in the Erina Valley.

In response, council said previous studies had identified constraints including flooding and that recent reviews recommended land zoned environmental should retain that zoning.

It therefore decided it would focus its work on existing urban areas in Erina in the short to medium term.

The strategy sets out a 20 year vision for the Somersby to Erina Corridor and has been prepared to guide growth and investment in the six centres of Somersby, Mount Penang and Kariong, West Gosford, Gosford City Centre, East Gosford and Point Frederick and Erina.

The strategy of 49 actions, 18 directions and 11 strategies, implements the NSW Government’s Central Coast Regional Plan 2036. Eleven per cent of new dwellings on the coast will be in this corridor and half of these will be in the Gosford city centre, about 2,300 dwellings.

Jobs are expected to grow in the corridor from about 36,000 jobs in 2016 to 46,000 by 2036. Somersby is earmarked for industry, business, food production and tourism. Mt Penang is earmarked for ecologically sustainable development that complements existing heritage and employment, recreation, education, business, specialty retail, accommodation and events.

The Hunter Central Coast Development Corporation (HCCDC) which owns, manages and maintains the Mt Penang Parklands precinct, advised council that the events space would be reduced in the near future and that the remaining parklands were “not viable as a large-scale festival site”.

As a result of this, actions for a Mount Penang Festival were deleted and council will collaborate with the corporation on a review of the masterplan for the parklands site.

East Gosford is described as low to medium scale residential neighbourhoods, local retail, dining and cultural uses. In response to public comments the council combined two actions for an East Gosford centre masterplan and a masterplan for the redevelopment of the western part of the centre into one action. It wants to build on the existing character with enhanced public domain and connections to the water and local “attractors”.

It amended actions to focus on Pioneer Park at the end of Point Frederick and the preparation of a revised Heritage Conservation Strategy, masterplan and interpretation strategy.

Erina is nominated as the regional shopping centre, with low to medium scale residential neighbourhoods, bulky goods, light industry uses and community uses. In response to both public and government agency submissions the Strategy was amended to acknowledge the introduction of the State Environmental Planning Policy introduced in 2019 to acknowledge Darkinjung land and allow for “development delivery plans” or DDPs.

These DDPs means any proposal to rezone these sites is required to go through a planning process to which council and the community will be able to provide input. Mayor Lisa Matthews said the strategy was important to help create an economic and vibrant community into the future. “As a council, it’s important for us that the Central Coast is seen as the growing and competitive region that it is.

It’s a wonderful place to live however we want to target economic development in growth areas and major centres as well as provide incentives to attract businesses to the Central Coast, ” Mayor Matthews said. “This plan will help us revitalise Gosford City Centre, Gosford Waterfront and the town centres as key destinations and attractors for business, residents, visitors and tourists. Council will review the strategy every five years.