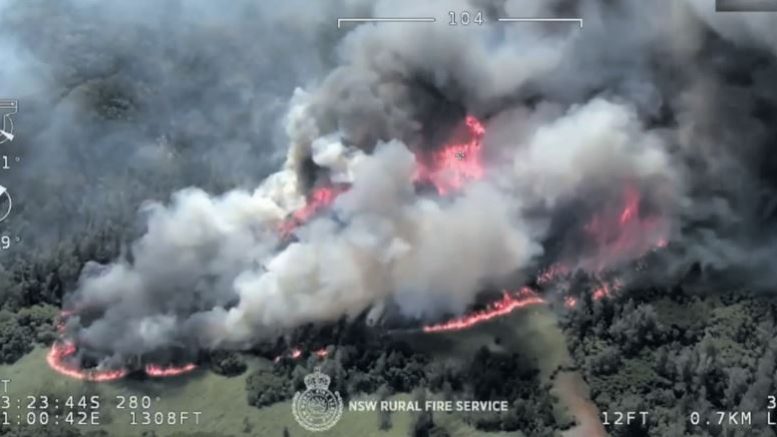 The Central Coast is still suffering under a pall of thick smoke as the Gospers Mountain and Three Mile blazes continue to burn, with communities in the region on high bushfire alert.

Four Central Coast schools, Central Mangrove, Kulnura, Peats Ridge and Somersby Public Schools, were closed on December 5 due to the proximity of bushfires, with parents advised to check the Department of Education website daily for updates.

The Gospers Mountain fire, which has been burning in the Wollemi and Dharug National Parks for weeks, has now spread to more than 232,900 ha and was listed on the Rural Fire Service (RFS) website as being controlled, but updated to Emergency warning level on December 5.

Closer to the Coast, the Three Mile Fire was on a Watch and Act warning level on December 5, having already burnt over 6,000 hectares of bushland in the Yengo and Dharug National Parks.

RFS Community Liaison Officer, Matt Horwood, said the warning could well be upgraded to Emergency throughout the day, with residents between Kulnura and Greengrove, including Mangrove Creek, Mangrove Mountain and Upper Mangrove, advised to be prepared to take action at any time, and Lower Mangrove residents advised to activate their bushfire survival plans.

Residents in nearby communities are advised to monitor conditions closely. Horwood said firefighters were at the mercy of weather conditions.

“These fires are growing and the whole community needs to be aware that they could continue to spread, ” he said.

“Weather has been delaying some of the back burns that we want to do. “Our first priority has to be life and property. ” Horwood said backburns, which are burnt ahead of existing fires to remove fuel which could help them spread, were not to be confused with hazard burns, performed as a precautionary measure.

Meanwhile, Australia Walkabout Wildlife Park at Calga remains on high alert, with all of its remaining animals relocated on December 4 as news came that the park could face spot fires from the north. With most of the Park’s 300 animals having already been relocated over the past few weeks, Operations Manager and Owner, Tassin Barnard, took the decision that “even the too high risk to move” animals needed to be taken to safety.

The last animals to go were the wallabies and emus, with as many of the wild animals as possible also contained and removed. With spot fires a very real possibility, staff were instructed on how to put them out by RFS volunteers on December 5.

The Australian Reptile Park is fire-ready with evacuation plans in place. Park Director, Tim Faulkner, said the team had been working closely with representatives from the Rural Fire Service (RFS), since mid-November.

“We are well-prepared, highly organised and informed with dedicated staff, fire safety procedures and evacuation plans in place, if it comes to that, ” Faulkner said. “If and when the fire threat comes too close, our top priority will be to relocate our koalas, then other animals in our care are categorised into evacuation phases.

“Thanks to incredible support and instruction from the RFS, we are confident in our decision in staying calm and not evacuating too early. ” Health authorities warn that Coast residents could be at risk as light winds and a series of overnight temperature inversions continue to trap smoke and ash in the Brisbane Water basin and across the broader Central Coast.

“If you have asthma or a lung condition, reduce outdoor activities if smoke levels are high and if shortness of breath or coughing develops, take your reliever medicine or seek medical advice, ” Dr Peter Lewis from Central Coast Local Health District said.

The RFS has also advised residents to keep doors and windows closed to prevent smoke from entering their homes, to ensure pets are protected and, if driving through smoke, to slow down, keep windows up and turn headlights on. Conditions could escalate with more dry weather and higher temperatures predicted in coming weeks and no rain in sight.

Gosford has so far recorded just 70 millimetres of rain in the final three months of 2019 compared with an historical average of around 280 millimetres.

Draft budget on public exhibition but doesn’t include coronavirus