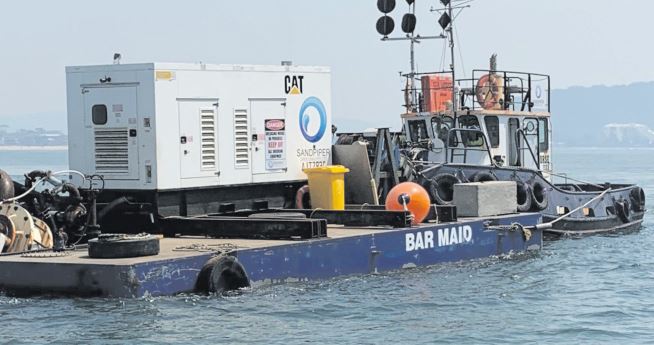 The dredge anchored off Ettalong.

Funds earmarked for dredging the Ettalong channel could be diverted to dredge The Entrance Channel.

Central Coast Council voted at its December 9 meeting to ask Member for Terrigal Mr Adam Crouch, whether part or all of the $1.45 million in funding left over from dredging Ettalong Channel could be diverted to fund dredging of The Entrance channel.

However, Peninsula Waterways Committee chairman Mr Mike Allsop has rejected the idea. “This is contrary to the terms of the State funding agreement used to rectify the channel recently, and risks co-operation with the State in future, ” he said. “I agree that urgent action is required at The Entrance, that in itself is a disgrace.

“But it should not be done with money taken from the ongoing maintenance and dredging of Ettalong channel. ” Last month, Mr Crouch announced that the current sixmonth program of dredging at Ettalong was “complete” but said repeated dredging was needed to keep it safe and accessible to recreational and commercial vessels.

He said the NSW Government and Central Coast Council had each committed $1.225 million in 2018 as part of Phase 5 of the Rescuing Our Waterways Program.

“We know there is no such thing as a one-off fix. “Council has a long-term dredging strategy for this local waterway and I encourage them to ensure it remains in an appropriate condition, ” Mr Crouch said. Cr Chris Holstein said further dredging would be council-funded in accordance with the last joint agreement.

“Beyond that expectation, we are back to the same debate, which will only come to a head depending on access (sand build up), ” he said.

Firstly, while the main problem at Little Box Head was resolved, the channel itself around Lobster Beach is still too narrow with tight turns making it difficult for vessels to pass in opposite directions.

“This needs to be widened a bit further toward the west and the red markers moved accordingly to allow safe passage, especially under a running tide. “Secondly, we have had no indication from Council as to what maintenance arrangements, or emergency works, will apply to the channel and how they will be funded and resourced.

“There has been stark silence on this. ” Mr Allsop said the community would be in an uproar if there was a repeat of the 2018 “debacle”.

This article appeared first in the Peninsula News print edition 485