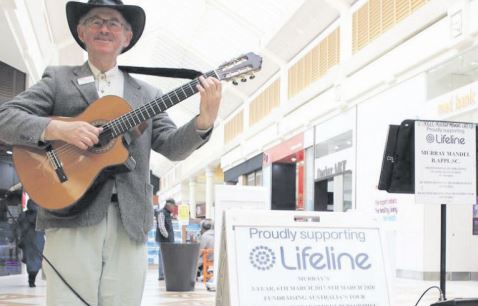 Murray Mandel is bringing his Lifeline busking tour to Erina

Murray Mandel is a musician on a mission and he’ll be coming to Erina Plaza in December as he edges closer to the end of a three year Australian fundraising tour.

Profoundly deaf, the 66-yearold Sydneysider decided in 2017 that he wanted to do his part to help his fellow Australians and kicked off his national charitable busking tour to raise funds and awareness for Lifeline’s 24/7 crisis support service.

With nothing but the blessing of Lifeline, his guitar and a campervan, Murray has so far raised just over $64,500 through more than 370 performances at shopping centres around the country, with 100 per cent of those proceeds going directly to Lifeline.

“Setting out, my aim was to raise awareness that Lifeline is there to support Australians 24 hours a day, seven days a week, no matter what they’re going through, but it’s meeting people on the ground that’s kept me going. “The simple things like hearing ‘keep up the good work’ and ‘thanks for doing this for us’ have stayed with me and made it feel like this has been worthwhile, ” Murray said.

According to Murray, he was often approached by people struggling with their own personal crises during performances and having heart to hearts with people had become just as much a part of his tour as the music. With the end of the tour now in his sights, Murray hopes he’s gotten Lifeline’s message across.

“My fellow Australians, if you are experiencing deep personal crisis such as abuse, trauma, domestic violence, bullying, mental illness, addiction, stress from family or work, or struggling with suicidal thoughts, please phone Lifeline on 13 11 14, ” Murray said. Murray will be performing at Erina Plaza from December 2 to 6 and will then start heading south towards Canberra where he’ll conclude the tour on March 9, 2020.

Murray said he’s keen to meet as many Central Coast locals as possible during his stint in Erina. “Meeting people is the best part of the tour. “Come over and say hello, I’m always keen for a chat, Lifeline related or otherwise, ” he said.

Ice Skaters in sync despite loss of Erina rink