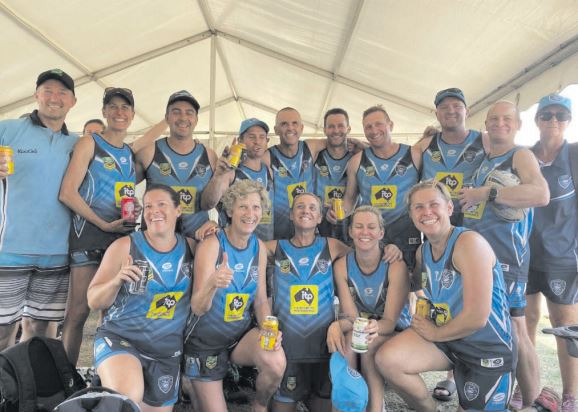 The Peninsula Touch Football Association has won two NSW titles at the Senior State Cup, which was held in Port Macquarie from December 6 to 8.

The Peninsula was represented by four teams and was heading into the competition as reigning titleholders in the Mixed Masters and Men’s 20s divisions. The Mixed Masters successfully defended their title with a 3-2 victory over the Port Macquarie Makos in what association vice president Mr Matt Sawyer described as a “thrilling grand final”.

“The Peninsula champions looked gone. “After a dubious Port Macquarie play, the ball was let go, resulting in a try and a 2-1 lead to the Makos. “But a try to the Peninsula, with 30 seconds to go, sent the game into extra time. “A couple of memorable diving touches to save tries by Rod Dillon and Anthony McVicker were highlights late in the game, but a try to the female player of the final, Karina Haddin, ensured the State title would return to the Peninsula.

“Karina Haddin and I were awarded players of the match, ” said Mr Sawyer. The Women’s 20s were the other team to pickup a state title after they beat Balmain in the Bowl Championship. “The girls were unlucky to be relegated to the Bowl after drawing with eventual Championship winners Manly in their first match. “However, they showed great character to pick themselves up and take out the gold medal in the grand final especially after losing Lucy Dillon to a knee injury early on.

“Jazz Wolfe played with two broken ribs and a number of girls were carrying various injuries. ” The Men’s 20s were unsuccessful in retaining their title. Mr Sawyer said the team showed moments of brilliance but couldn’t get it together and were knocked out just prior to the championship rounds. The Men’s 50s were the association’s final rep team and made it to their semi-finals despite struggling to get player numbers. “They managed to get 12 players for the tournament, but came up against a strong year for their age division. ”