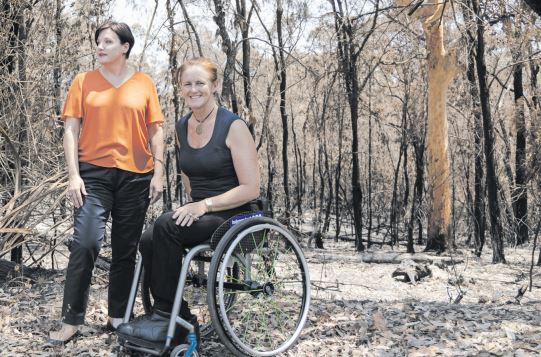 McKay said she had concerns over how relief would be provided for firefighters who have been battling the Gospers Mountain and Three Mile fires for many weeks. “This is a largely volunteer workforce working day in and day out, ” she said.

“The question is, how is this going to be maintained? “We could be looking at no rain until February or beyond. “We have heard no word from the Premier on what will be happening (on the fire front) over the Christmas New Year period. “People need to have a break and spend time with their families. ” McKay said she was also concerned about the effect on small businesses, who are releasing staff on paid or unpaid leave to fight the fires.

“This is not sustainable in the long term, ” she said. “Small businesses operate within a community, but this is an issue that the government needs to address. ” Tesch said many volunteer firefighters, forced to take leave without pay to battle the blazes, would be facing Christmas with little money in the bank.

“I have been at the fire control centre every day and these fireies are doing an amazing job, ” she said. McKay said she had fielded many questions on what role defence personnel were taking in the fire effort. “The Minister can’t tell me how many defence personnel are helping or even where they are, ” she said. “They don’t fight fires, but there is a lot of ancillary work they could be doing.

“More defence personnel are urgently needed to support our RFS volunteers who are slogging their guts out.

“These people could be clearing debris, cutting fire trails, carting water, and feeding and transporting crews. “Gladys Berejiklian must clarify exactly how many defence personnel she has requested from the Commonwealth, how many she has received, where they are stationed and what is the plan to sustain this effort. “Communities are outraged that the Premier hasn’t facilitated this help to arrive. ”

Shadow Health Minister, Ryan Park, said people need to be alerted if they are in harm’s way and what they should do. “Should they wear face masks? ” he said. “Is it safe to sleep with the windows open or let children play outdoors?

“This advice should be backed by an extensive public health information campaign across mainstream media and social media channels. “Local hospital and ambulance services need immediate additional resources to deal with escalating health complaints, particularly as that relates to cardiovascular conditions, breathing difficulties and asthma. ”

Member for Terrigal and Parliamentary Secretary for the Central Coast, Adam Crouch, said unless politicians are “picking up a hose or buttering sandwiches”, they should stay out of the way of hard-working firefighters.

“I am in constant contact with Superintendent Vicki Campbell and I want to thank all of our paid and volunteer firefighters for their fantastic work in containing the fire threat to minimise any loss of life or property, ” Crouch said.

“Last weekend I visited the Kariong Fire Control Centre to thank emergency services personnel for their selfless service, and I also regularly visit my local Rural Fire Brigades all year round. ”

Prepare for an uncertain future

Smoke, fire … and now for summer