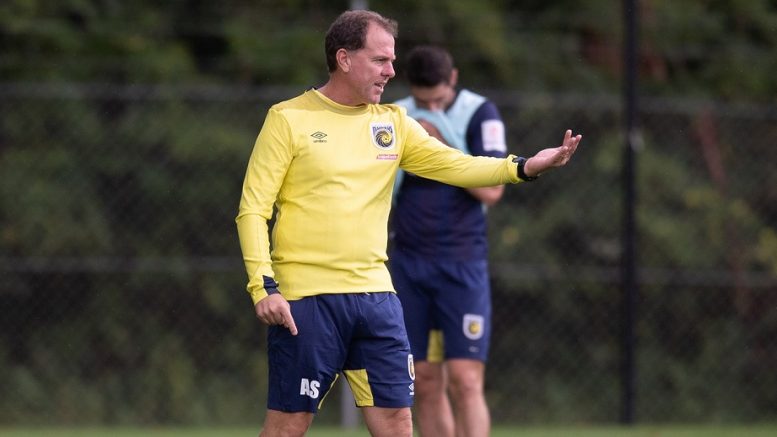 A tough night in Brisbane ended in defeat for the Mariners on Saturday night, with second half goals from Roy O’Donovan and Scott Neville enough for Brisbane Roar to take the three points.

The match started slowly with the hosts having the run of play early, but they were kept at bay by the Mariners’ backline and keeper Mark Birighitti. Eunsun Kim created several opportunities early in the match, at one point thundering a strike into the crossbar. Giancarlo Gallifuoco fizzed an effort wide and Matt Simon was denied by Roar keeper Jamie Young after a good turn in the area.

It was then Birighitti’s turn to again save the day as he produced a stunning one-onone stop to deny O’Donovan racing towards the Mariners goal on the stroke of half-time. The Roar’s first goal came in the second half when Roy O’Donovan managed to get a touch past Birighitti and in. Mariners Coach Alen Stajcic brought Sam Silvera and Jordan Murray into the attack but could not stop the Roar going two goals up as Scott Neville headed home from a corner with 24 minutes left to play.

Silvera almost created a lifeline inside the final 10 minutes as he combined neatly with Lewis Miller to find space in the area, but his shot was parried by Jamie Young. The loss sees the Mariners drop down to tenth place on the ladder. They will sit next weekend out with the bye before travelling to face Sydney FC on the road in round 10.

Speaking after the game on Saturday, Stajcic said his side came out of the blocks slowly and adjusted poorly to tactical changes from Robbie Fowler’s men. “I thought Brisbane dominated the first fifteen minutes, we didn’t really get out of our half, ” he said.

Asked about the impact of Sam Silvera, who came off the bench this week, Stajcic said the youngster provided the spark that was needed after the Roar went ahead and hinted that new signing Jair could be in line for a debut when the Mariners take on Sydney FC.

“I thought he [Silvera] looked dangerous when he came on and created some good moments. “Coming up here with the conditions we thought he could give us the energy late in the game and he certainly did that. ”