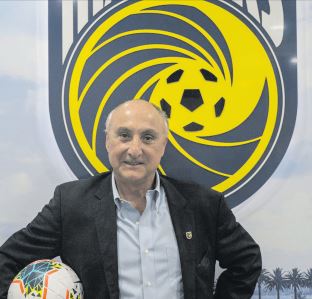 The Central Coast Mariners have appointed Anton Tagliaferro as Co-Chairman of the Club, alongside Mike Charlesworth.

Tagliaferro’s appointment to the position comes after he joined the Mariners’ Board of Directors at the beginning of 2019.

Charlesworth lauded Tagliaferro’s contribution to the club since coming onboard and welcomed him to the new role. “Since becoming involved with the Mariners, initially as a sponsor and more formally as a Director of the Board in the last 12 months, Anton has been helping me in developing the Mariners’ strategy, ” he said.

“His previous experience in football management stems from his decade long involvement with running a club in Europe as well as a leading Academy in Sydney. “His insights have so far proven very helpful in developing the Mariners’ strategy. “I welcome Anton to this important role and we all look forward to continuing to work closely with him moving forward, ” he added.

Tagliaferro is the Founder and Investment Director of successful Australian funds management company, Investors Mutual (IML). IML is one of Australia’s leading fund managers and his achievements in the finance industry led to an induction into the Australian Fund Managers’ Hall of Fame in 2005. Speaking following his appointment, Tagliaferro highlighted the club’s Academy as a focal point of his vision for the Mariners and spoke highly of Charlesworth’s work as Chairman.

“I am grateful to Mike for this appointment and look forward to working closely with Mike and all the club’s staff to help drive the Mariners forward, ” Tagliaferro said. “This a fantastic club and I look forward to the challenge of building the Mariners back up to its previous status in the A-League

“We are all working hard to ensure that the Mariners can have a competitive team in the A-League that can challenge for a top six spot, and while we have seen an improvement this season so far, there is still lots of work to do going forward to achieve our stated goals. “I am particularly excited about the vision we all share to establish the Mariners’ Academy as the best Academy in Australia and to make it the number one destination of choice for Australia’s best young players.

“Our vision is to attract the best young players and to help develop them into the A-League players and Socceroos of the future, and we are making good progress here. “In this regard I must thank Alen Stajcic and his assistant, Nahuel Arrarte, as well as Nick Montgomery and Ken Schembri for all sharing this vision and all working so well together in order to make this vision a reality, ” Tagliaferro said.

We sing for yellow