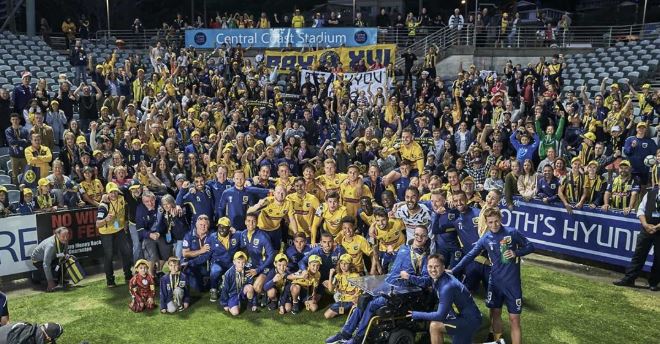 A happy 'Mariners Family Photo' after the game against Adelaide before Christmas. Image: CCM media

These pre-Christmas games have always been tough for the A-league as busy families prepare for the festive season. Nevertheless, near 5,000 people rocked up to the beautiful Gosford based stadium on a refreshingly cool and breezy evening.

This game was anything but cool. Right from the kick off whistle the Mariners had the energetic momentum built against Sydney FC last week, a game that disappointed fans despite gallant efforts. Indeed, an opening flourish almost payed off as Jordan Murray and Jair worked an opening in the second minute.

This Sunday the fans were witness to an assertive and well coordinated spectacle that kept all eyes on the game, rather than the scenic views out over Brisbane Waters.

At 15 minutes (a-league site says 4th minute?) a furious battle in the box peaked when the young centre back Kyle Rowles found the ball as it dropped from the air and fired it into the bottom corner, to give the Mariners an early lead.Suddenly the view no longer mattered.

A second treat came before half time as Milan Duric fired from outside the box, a ball too fast and accurate for Adelaide’s keeper Paul Izzo, a former Mariner himself who watched the back of the net ripple. A feast for hungry Central Coast fans.

So at half time the home team were 2-0 up, something that made the half time pie and chips taste and smell good.

The second half started before the team and supporters had digested the first half lead, and as a result Adelaide sniffed an opportunity, before we knew it Ben Halloran had scored a quick and quiet goal for The Reds. Time to wake up.

Game on. The home side kicked back into action. Adelaide too lifted and a wonderful battle of football played out upon the sandy pitch. Few doubted Adelaide could come back to win. They have done so before, many times and at times looked like they’d snatched the momentum from the Mariners.

The home side played out the second half however with a professional confidence not seen for 5 years to deny the celebrated Adelaide Reds another goal and take a much-deserved win.

This win pulls the Mariners off the bottom of the ladder to 9th position, though more importantly it should give the team and their fans some much needed confidence, to hold their heads high around the family Christmas table this year.

The loyal family fan base that has been built up since the inception of the club in 2004 as an A-league foundation club has waned a little in recent years. Supporters have suffered all manner of downs since the team won the Grand Final back in 2013.

The team has certainly shown real signs of revival this year under new coach Alen Stajcic. Exciting new player signings have resulted in a more coordinated and aggressive style of game.
Yet, despite the new regime, good score cards have gone wanting and so the team has struggled and then plummeted to the bottom of the ladder.

That may have been changing before our eyes last night.

Coast Community News is a Central Coast Mariners partner for the 2019/2020 season.

New Low Rise Housing Diversity Code not welcomed by all