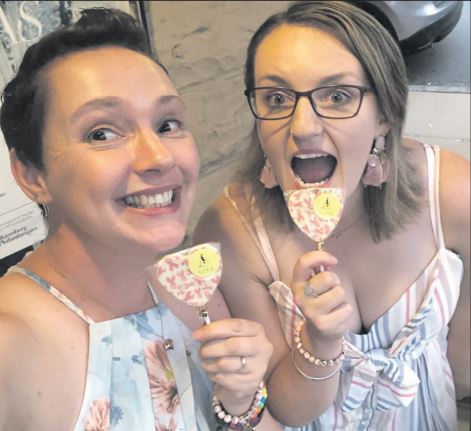 Two local women are gearing up to get their gear off as calendar girls for Australia’s leading young women’s breast cancer charity, So Brave.

Bensville’s Carol Smith and Gosford’s Beck Baldwin were two young, fit and healthy women when they were both diagnosed with triple negative breast cancer, one of the most aggressive forms of the disease. Beck was 29 and Carol was 36 and had been trying for a child.

Neither women had a history of breast cancer in their families and were devastated by their diagnosis.

Within two weeks of her diagnosis, Carol started a five month course of chemotherapy and had a double mastectomy for peace of mind. She opted out of a reconstruction, intent to focus on healing and reclaiming her life.

Both ladies underwent treatment at Gosford Hospital and met through a mutual friend when Carol was seeking advice during her treatment period, with Beck becoming a fountain of advice and support for her newfound friend, having been diagnosed a year prior.

Since coming to terms with their cancers, both women were keen to spread the message of regular breast screening to other young women, regardless of their perceived health or family history. That’s how they stumbled upon So Brave, a charity dedicated to spreading the same message and raising funds to support young women through their breast cancer journeys.

The most iconic resource that So Brave produces is an annual calendar that sees 12 breast cancer survivors embrace their new bodies and tell their survival stories. Each model is transformed into a work of art by a body painter, with the first So Brave calendar, launched in 2016, raising over $70,000 for the National Breast Cancer Foundation and Centre for Personalised Nano-Medicine.

Since then, 48 survivors have bared their bodies on the pages of the calendar as So Brave Ambassadors and as faces of the ‘flat and fabulous’ movement. The calendar has become such an inspiring and empowering resource for cancer survivors that So Brave has made a friendly competition out of it, with would be models challenged to fundraise a minimum of $5,000 to be considered for the calendar.

Both Beck and Carol are 2020 Model Ambassadors and should they succeed in becoming calendar girls, they’ll be the first Central Coast women to grace the pages of So Brave. To help get themselves calendar ready, Beck and Carol held a fundraising evening at Avoca Beach Picture Theatre on December 5. Including a raffle and screening of Rian Johnson’s new murder mystery, Knives Out, the pair successfully raised $2,776, with around 100 people taking part in the evening’s festivities.

Both women now have their endgame goals in sight and it looks likely they’ll end up calendar girls for the 2020 So Brave calendar. If successful, Beck will hold her calendar shoot on the Coast, while Carol, who is poised to begin a road trip around the country, will hold hers wherever the road takes her. Regardless of whether they make the calendar or not, both women said that they’re pleased to have played a part in spreading the So Brave message that young women get breast cancer too.

“Being a So Brave Ambassador provides me with the opportunity to own my new body, accept the scars, acknowledge my journey and hopefully stand strong, brave and beautiful in front of the camera for So Brave.

“I can only imagine how healing this will be for me mentally and emotionally, ” Beck said. “I want women to know that young breast cancer happens and they should feel confident and comfortable seeking medical advice as soon as possible.

“So Brave empowers young cancer survivors and I want to be able to tell anyone in a similar position to me that they can be stronger than the storm, ” Carol added.

Both ladies need to fundraise another $2,000 to reach the $5,000 target and are calling on the Coast for support. “We’re now both so close to our goal and have a range of sponsor opportunities for our calendar pages, ” Carol said.

Anyone interested in sponsoring Carol or Beck can get in touch with them via the Facebook page, Carol and Beck’s So Brave fundraising. Both ladies also have live fundraising pages on the So Brave website for anyone wishing to donate directly.

Welcome to the Lyons Den