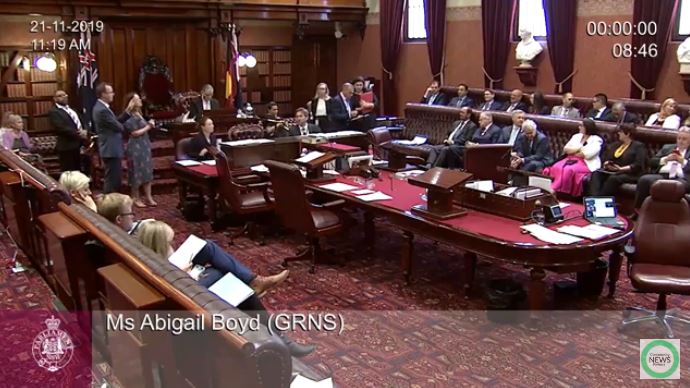 Only six of the 42 upper house members, including Boyd, supported the Bill when it went to the final vote on November 21, with Liberal, National and Labor party members among those voting against it.

The Bill, which sought to replicate similar protections afforded to water catchments in Sydney and the Illawarra, was aimed at preventing contamination of drinking water by the Wallarah 2 coal mine.

“It is disappointing that the major parties continue to put the short term profits of the coal industry ahead of the long term interests of the community, ” Boyd said of the outcome.

No project is worth risking the drinking water of 350,000 people. “We can protect the environment and provide thousands of good jobs by investing more in renewable energy and manufacturing on the Central Coast. ”

But Labor Member for Wyong, David Harris, said the Greens’ Bill; had “got it all wrong”. “The Bill failed to acknowledge the fact that the Berejiklian Government has now issued a mining licence which gives permission to Wallarah 2 to mine coal for 28 years, ” Harris said.

“Labor has to acknowledge the fact that the Liberals have given permission to mine in our water catchment. “The facts are that there will not be the numbers in the Parliament to pass any legislation, at least until after the next election in 2023. “Labor has taken the position that we will focus on the 122 conditions imposed in the licence to make sure no mining begins until they are 100% met.

“Labor continues to have the position that mining under our water catchment is reckless and we will continue to try and protect the integrity of our precious drinking water. “The Green’s Bill had no chance of success and Labor will remain focused on what can be achieved to protect our water catchment.

“I have personally opposed this mining for over a decade and remain committed to protecting our water supply. ” Several Coast residents rallied outside Parliament House on November 21 and many made it into the public gallery for the final reading of the Bill.

Liberal Leader of the House, Scott Farlow, said the proposed protections would mean the cessation of all existing mining in the area, including the Mandalong coal mine and Boral Montaro clay mine, causing job losses and adverse impacts to regional growth.

He cited a list of environmental reviews that the Wallarah 2 mine had passed through as well as an extensive set of conditions that had been set for its safe operation.

A speech against the Bill was also made by Central Coast MLC, Taylor Martin, who said the Wallarah 2 coal mine would generate $800M in mining royalties for the State over the life of the project.

Boyd made it clear to all members of the House that the Bill would include amendments so no existing mining operations or jobs would be affected.

She acknowledged there could be costs associated with compensating mine owners, but it would be nothing compared to the cost of compensating Central Coast residents for the contamination of their drinking water. “Sometimes, when you make mistakes, it costs money to fix those mistakes and approving this mine was a huge, huge mistake. ” she said.

The day after the Bill was defeated, Boyd and Greens’ Senator for NSW, Mehreen Faruqi, met with residents on the Coast. Boyd said it was clear that the Coast community was coming together as one to fight the “onslaught of attacks on the local environment”.

“The Greens see our place as supporting and amplifying these campaigns and we will continue to stand side-by-side with the community to protect our Coast, ” she said. “The world is changing and the writing is on the wall for coal, ” Faruqi said.

“We are seeing the coal industry close down in places like Germany while our traditional export markets are pledging to cancel coal power stations. ”

Kariong Library to be closed for relocation