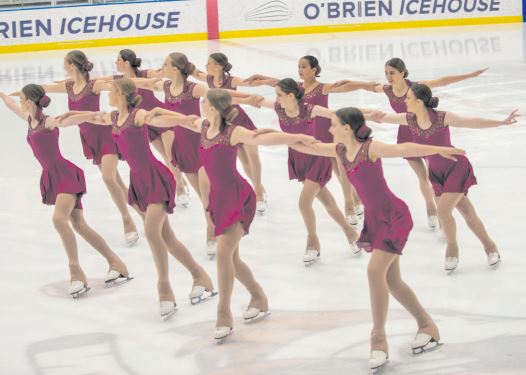 One adult team and one mixed age team, comprising mostly children 12 to 16 years of age, travelled to Melbourne for the four days, two days of training and two days of competition. The championships are the final event of three competitions that began in September.

The Southern Sky skaters have continued to train and compete despite the closure of the Erina Ice Rink in August. The closure of the ice rink caused many skaters to quit the sport and in particular, individual competition.

Southern Sky however, was able to support a dozen young skaters to continue with synchronised skating, in which up to 16 skaters take to the ice together to create different shapes and formations, similar to synchronised swimming.

Coach Christine Leghorn said her mixed age team began practicing in February, but after the Erina rink closed, they made the decision to travel all the way to Penrith Ice Rink once a week to practice. “It has required a big commitment from the kids and their parents and meant a lot of car pooling.

“We are so proud of what the girls have been able to achieve this year, especially with the technically more difficult routine.

“The lack of ice to practice on led to a drop in confidence going into the last competition, however they fought hard to perform well, ” Leghorn said.

Three skaters from the group, Matilda Ralph, Elicia Ferguson and Christine Leghorn, will now travel to Croatia in January to compete in the Zagreb Snowflake Trophy, while one skater, Ashbyi Taylor, has just returned after competing in the Lumiere Cup in the Netherlands.