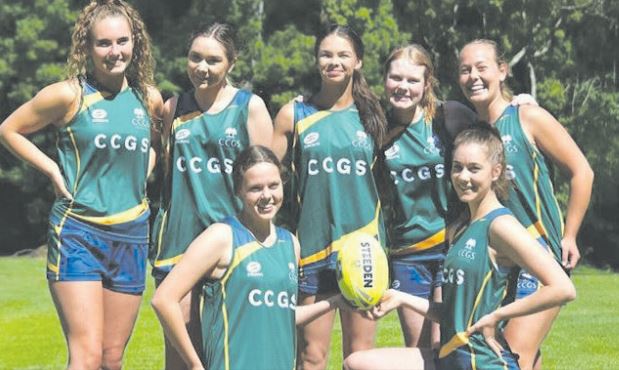 The numbers indicate that CCCGS could be on to its most popular girls’ sport offering yet, with the sport coming into its own after an Independent Sporting Association (ISA) trial last year saw it greenlighted for rollout earlier this year. Andrew Cameron, Touch Football Convenor and Computing and ICT Integration Teacher at CCGS, said the staff were blown away with the interest.

“We knew there was a bit of interest, but we were surprised by just how much. “We now have four teams split from Year 7 to 10, with more girls asking if they can get involved, which is great, ” he said. CCGS is now competing in the ISA Competition and while their opponents had the advantage of several more years’ experience, Cameron said CCGS players were giving it their all.

“Every weekend our teams are competing in the ISA competition against teams who have already played the sport for several years. “They are showing their tenacity and strength as they take on the bigger guns of touch football winning and losing games through all Divisions.

“Closer to home, our teams have joined the Central Coast Touch Football Association where they have shown great success. “We’re developing amazing relationships in the local competition with some representative players taking on coaching roles for us.

“We hope to be able to give back to the competition with our players and future coaches as we progress and get better, ” Cameron said. Despite the whirlwind success, Cameron said the focus would remain on providing a fun and physically challenging sport for female students to enjoy together.

“The spirit of inclusivity and friendship along with a positive attitude is high amongst our teams, ” he said. Development and playing opportunities are also rife, with Year 7 student, Tessa Hudson, already being selected for the Central Coast Dolphins’ Under 14’s Representative team, despite not having played touch football prior to this year.