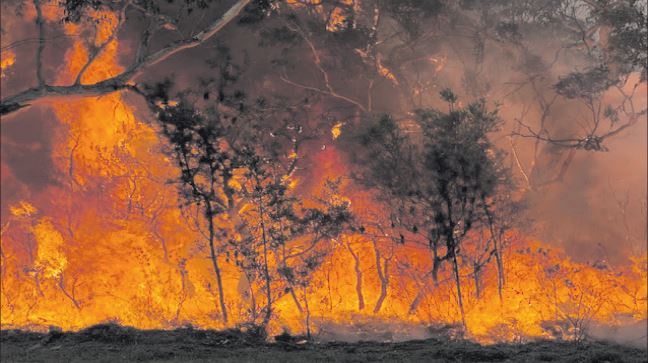 Rural Fire Service (RFS) firefighters will take advantage of cooler weather conditions over the next few days to conduct back burns in an effort to contain the Three Mile fire, ahead of another wave of heat expected from Sunday, December 15.

An RFS spokesperson said on Thursday, December 12, that crews were collaborating with Lower Hunter firefighters on a huge back burn near Bucketty and Kulnura as they attempted to hold the blaze at bay. “Residents at the northern end of the Three Mile fire zone can expect to see a lot of smoke and fire in coming days, but this will be from the backburn, ” the spokesperson said.

Wednesday and Thursday this week saw fire activity ease across the entire fireground, following a horror day on Tuesday, when searing temperatures and strong winds saw homes in the Spencer and Mangrove Mountain areas under threat.

“Our plan is to make the most of the favourable conditions while they last and strengthen those containment lines, ” the RFS spokesperson said.

“With active fire edges still having the potential to spread, we will be concentrating on safeguarding valuable assets. ” The spokesperson said firefighters were exhausted, but motivated to protect life and property and to get the situation to a “manageable level”.

Tuesday saw some tense moments for Coast residents as firefighters expanded their operations following a huge weekend effort to control blazes in the Wollombi and Laguna areas. Robyn Downham of Spencer fled the scene on Tuesday to spend time with friends at Avoca, leaving partner, Mark Hudson, to protect the couple’s property.

“It wasn’t as much the fire threat as the emotion which got to me, ” Downham said. “I had a bit of a meltdown. “The situation has been horrendous since October, but we have a wonderful community and we all did everything we could to prepare for the fires. “We are so grateful for the newly finished public wharf and for the wonderful firefighters. “We have seen brigades come to help from far and wide. “We would like to see politicians at all levels do a little more. ”

Hudson said fires came as close as 10 metres to the couple’s property. “I woke at 3am to see flames to the rear of the property, and a neighbour and I watched the fire approach as we armed ourselves with buckets and so on, ” he said. “But the firefighters arrived before noon and I was very confident when they came with their tankers. “We have a lot of lantana near the property and they set up a backburn but when the wind came up it was a very tense time. ”

Hudson said firefighters did an amazing job and although embers could still be seen that night, by the next day, they had burnt themselves out. “We’re still on alert and have concerns about running out of drinking water, ” he said. Elaine Raines of Mangrove Mountain was relieved to be breathing fresh air on Thursday, after some tense times earlier in the week which saw fires encroach onto the family property.

“It’s nice to have a bit of a break, we’ve had some really tough days, ” she said. “We had some fire on the property, but it didn’t come near the buildings or sheds. “While we were prepared and ready to defend our house, sheds and livestock, the wind that was forecast didn’t come, so lit embers didn’t appear.

“We just had burnt leaves and ash and we were very grateful. ” Even so, the community remains on alert as neighbours work as a team.

“To date we have been able to defend our property and we’re hopeful the fire will infill, ” Raines said.

“There is a lot to burn between here and Wollombi. ” Residents in the Glenworth Valley, Peats Ridge and Calga areas have been advised to monitor conditions and stay alert.

Glenworth Valley Outdoor Adventures Marketing Director, Andrew Cooper, said on Thursday that while the fire was a concern, the operation was not in any immediate danger. “The backburning efforts and containment lines established by the fire service have worked incredibly well, and are expected to prevail, ” he said.

“The fire front remains almost 10km away and has not progressed westerly for over five days. “The closest fire front is contained at Wisemans Ferry Road (on the Eastern side of the creek), and with the passing of time, there’s a possibility that the front burns itself out and runs out of fuel. “Glenworth Valley is operating as usual, with a full complement of services.

“Although there is no immediate danger, we remain vigilant and are in regular contact with the RFS. “Glenworth Valley has been operating for over 50 years, and having experienced numerous bushfires over the decades, has developed a comprehensive fire safety plan that includes animal evacuation to safe refuge zones.

“We wish to express our sincere gratitude to the RFS, volunteers, and everyone involved in the firefighting effort for their amazing dedication and resilience. ” Australia Walkabout Wildlife Park at Calga remains closed, with all animals having been relocated to safe places and the Australian Reptile Park at Somersby is fully operational, with emergency plans in place should evacuation become necessary.

Wisemans Ferry Rd was closed between Wisemans Ferry and Mangrove Mountain on Thursday, with residents advised to monitor road closures on the RFS’s FiresNearMe app.

“The smoke might cause no more than eye or throat irritation for most people, but those with known heart or lung conditions, or the very young and the very old, need to be extra cautious when smoke is about, ” a spokesperson said. “The best course of action is to stay inside, with your windows shut. “If you have air conditioning, it can help to filter out the smoke that gets into your house.

“On smoky days, when there is a visible haze, our advice is to: avoid outdoor physical activity; take extra care if you have a pre-existing lung or heart condition, like asthma, emphysema, angina or heart failure; take your regular medications; follow your Asthma Action Plan and carry your relieving medication with you; and, seek advice from your GP if your symptoms don’t settle.