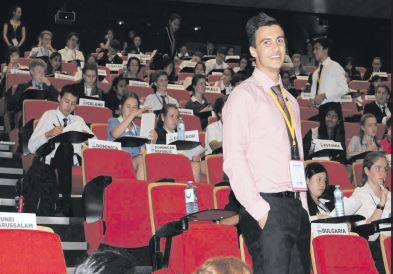 The Hall of Fame is an online gallery launched by RYSS, with support from the Department of Families and Community Services, that tells the stories of inspiring young Central Coast residents, and it was designed to show local youth that even in the face of adversity, nothing can stop them achieving their goals.

Amongst the inaugural Hall of Famers, several call the former Gosford LGA home, including current Central Coast Youth of the Year and Gosford local, Deen Rad. Described as a born leader, Deen has been involved in a number of youth development and leadership programs from the grassroots local level, like Rotaract and the Kokoda Youth Leadership Challenge, state programs like YMCA NSW Youth Parliament, right through to the international stage with UN Youth.

The 24-year-old’s also got a head for numbers, having previously worked with Macquarie Bank in their wealth management operations. Deen has recently joined PWC Australia as a consultant with their Private Clients’ team. He has studied a Bachelor of Applied Finance/Bachelor of Economics at Macquarie University and is currently a candidate studying for the Chartered Financial Analyst (CFA) Program.

Whilst at Macquarie University, Deen served as a student ambassador, speaking to and mentoring thousands of students about how to achieve their aspirations via tertiary education and professional experience. Passionate about enabling opportunity for others to lead their best lives, Deen currently acts as the Chief Financial Officer for the John Mac Foundation, a Not-For-Profit organisation that provides university scholarships to young refugees and promotes social business and microfinance with Grameen Australia, the Australian replica of Nobel Peace Prize winning institution, the Grameen Bank.

Deen picked up his Hall of Fame nomination for highlighting just how much a young leader can achieve and for doing his part to provide mentoring opportunities for the next generation.