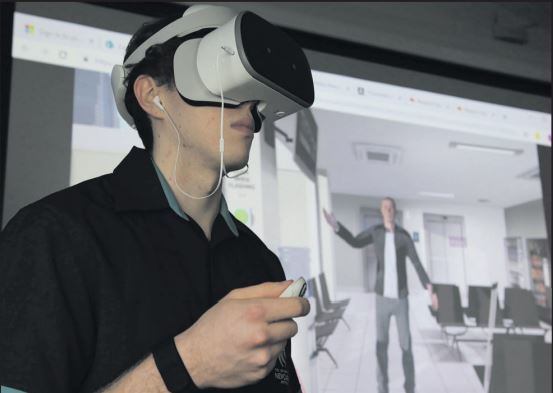 A world first virtual reality (VR) simulation to help train nursing students in conflict resolution is being rolled out at the University of Newcastle’s (UON) Ourimbah Campus.

The Conflict Resolution VR program replicates a real world emergency room and asks students to respond to a high pressure mock scenario. As part of the Bachelor of Nursing, students undertaking their mental health module are immersed via a VR headset.

Faced with ‘Angry Stan’, an avatar based on real world interactions, users must remain calm and navigate a range of challenges to manage the situation. The program is a collaboration between UON’s School of Nursing and Midwifery and the University’s IT Services Innovation Team, and is the first of its kind to respond with real time biofeedback including the human heart rate.

It gives second year students a realistic insight into the clinical workplace where they can practice controlling their stress levels, managing conflict and building resilience in the classroom before entering the clinical environment. “Working in an emergency environment can be incredibly demanding, with emotions running high and competing priorities, ” said project lead and lecturer in the School of Nursing and Midwifery, Dr Donovan Jones.

“Knowing how to effectively diffuse an escalating situation while keeping a clear head can make a life-changing difference in emergency care, which is why we want to ensure that our graduates are well equipped with resilience training when entering the workforce, ” he added. With more than 30 years’ experience in the field, Professor of Mental Health Nursing, Mike Hazelton, formed part of the team to develop Angry Stan based on his very real, lived experience.

“Nursing is an incredibly rewarding career, however it’s an environment where emotions can run high as you encounter people who are having possibly the worst day of their lives, ” Prof Hazelton said. “Stan represents someone that health workers may come face to face with in an emergency environment. “He is looking for his friend who has been brought in as a patient and is becoming increasingly agitated, ” he said.

Dr Jones said that the task at hand was to assess the situation and respond to Stan’s questions in a way which puts him at ease, alongside balancing competing priorities, whilst also maintaining a steady heartrate. “Essentially, the calmer they remain, the easier Stan and the scenario is to deal with. “Even if unprovocative responses are selected by the user, the wording is altered to be more provocative if the technology picks up from their heart rate that they are stressed, ” Dr Jones said.

“We support a zero tolerance for violence against healthcare workers, which is why it was imperative to develop an immersive training program where students can practise dealing with these potential situations in a safe, repeatable and realistic environment, ” Prof Hazelton added.

Looking at the bigger picture, Dr Jones said the team behind the program was working towards ensuring that it can become a valuable resource outside of the higher education sector, with the goal to see it adopted into health training and best practice across the board. “Equipping employees with ways to maintain their mental health should be of paramount importance. “We realise that dealing with conflict in the workplace isn’t something that’s exclusive to healthcare.

“Moving forward, we’d like to explore gender roles and environments within Conflict Resolution to make it applicable to people working across a range of industries, ” he said. With this training under their belt, UON’s next wave of health workers could very well be bringing an entirely new approach to staff patient interactions to healthcare providers across the Coast and it can’t come soon enough given the year that was at the Coast’s two major hospitals.

Staff dissatisfaction regarding security, safety and workflow at Wyong and Gosford Hospitals made consistent headlines this year, with seven rallies over conditions, disputes and safety concerns held across both hospitals since January. Security in particular, has been a prominent issue for Wyong Hospital staff with representative bodies like the Nurses and Midwives Association of NSW and the Health Services Union (HSU) NSW both lending support to staff claims that security and safety had fallen by the wayside due to chronic staff shortages.

After a lengthy campaign for more security staff championed by the HSU NSW, the State Government is in the process of rolling out 13 new security officers (to be shared across Wyong, Gosford and Blacktown Hospitals) and CCTV cameras in each hospital’s Emergency Department. When announcing the trial in November, NSW Health Minister, Brad Hazzard, said its focus would be on identifying and intervening in security incidents before they escalated to violence.

With the focus seemingly on preventative measures regarding staff safety across the board, the Chronicle contacted both the Central Coast Local Health District (CCLHD) and HSU NSW to discuss how a resource like Conflict Resolution could change the landscape of Emergency Departments. The CCLHD declined to comment.

A HSU NSW spokesperson said that while the HSU considers de-escalation training to be critically important to reducing violence against hospital staff, it was by no means a suitable replacement for the employment of security officers.

“The most critical thing in reducing violence is employing more security officers. “We urgently need at least 200 new officers across metropolitan NSW, with special constable powers, ” the spokesperson said.