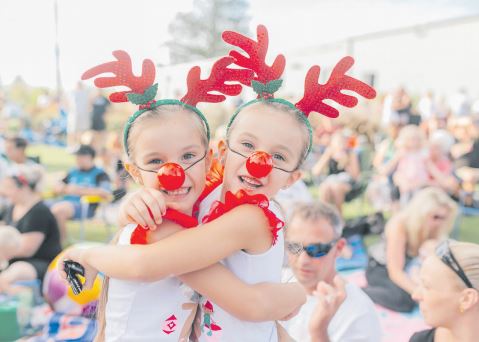 Gosford Uniting Church is preparing for its Community Christmas Carols, to be held in Gosford’s Kibble Park on Christmas Eve (December 24).

“Singing in community is a wonderful way to build respect and a sense of belonging, ” said Carols’ Committee member, David Smallman. “The whole evening has a picnic atmosphere, so bring your own food and something to sit on.

“The carols have been run annually since 1961 and Gosford Uniting Church members, considers them an important part of the church’s involvement in community activities. “Central Coast Council is a significant sponsor of the event. “Amplification is generously provided by Waters Cranes.

“Tea and coffee will be available and 100 per cent of any donations on the night will go towards the drought and current bushfire appeals, ” Smallman said. The Gosford City Brass Band has also signed on to perform at this year’s Carols. Consisting of musically talented locals, the Band has been in action for over 100 years.

Members of Central Coast Philharmonia Choir will also be lending their voices on the night.

“The fun begins at 6pm with community building games involving children and their guardians, ” he continued. “The games are designed to provide activities which develop all age group teamwork in a happy, innovative and challenging way. “The band starts at 6:30pm with a musical interlude with traditional carols by candlelight beginning at 7pm. “Santa arrives just before 9pm at the close of the evening” she added.

A short celebratory church service will be held at Gosford Uniting Church, opposite the park, in Donnison St, from 9:15pm to close out the night. Wilton said the carols were a way for the Central Coast to come together.

“The Christmas Carols in Kibble Park on Christmas Eve epitomise the love, joy and peace of Christmas and they are a great way to become involved in community life in Gosford.

“It is a wonderful way to meet new friends and share food and singing in a safe, noncommercial and life affirming way, ” he said.