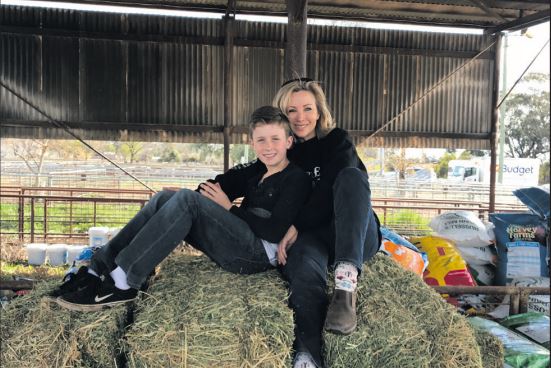 After watching a story about an elderly, sixth generation farmer being led off his drought stricken property by bankers and forced to live in his car and take showers at the public pool, Somersby’s Gayna Harvey decided it was time to act.

“It deeply affected me. “I realised that putting up a few empathetic posts on Facebook and then going to lie in a 200 litre bath just didn’t cut it, ” says the 54-year-old mother of two.

Harvey wanted to do something meaningful, to create a drought relief initiative that everyone could join. She had limited event management experience and even more limited resources, but she understood farming and she had a truck.

So in September, 2018, she and a small cohort of supporters filled her horse truck, three other trucks and four horse floats with over seven tonnes of stockfeed, four tonnes of water, food hampers, clothing and other living essentials and headed off to Dunedoo.

“The response was massive, ” says Harvey. “In two weeks, I had recruited 28 people, most of them strangers. ” And with that, ‘On the Bandwagon’ was formed. The group now attracts a convoy of like minded supporters each time they go on a relief run to country towns across NSW and Queensland. “There is nothing so uplifting than to watch fellow Aussies jumping in the trenches with each other.

“You can’t imagine the sight of 80 massive B doubles pulling into the showgrounds at dusk, all blowing their horns, lining up row upon row, drivers high fiving as they pass. ” A minor inducement for hands on supporters of On The Bandwagon are the end-of-day parties. Harvey is keen to ensure there is ample opportunity for supporters to meet, sing, dance or just share stories with farmers and their communities.

“It’s a critical part of supporting mental health in rural areas, for farmers to have an opportunity to talk about their hardships, to know they are not alone. “It also means those who support the relief effort bring back an important message to their local MPs here on the Coast. ” One of the ingredients to success Harvey says is the need for logistics support at the other end. With this in mind, she formed a working partnership with the Lions Club who have also been proactive in mobilising resources to help droughtaffected farmers.

In particular, she has worked closely with 78-year-old Deidre Shaffer from Belmont Lions, who Harvey describes as an amazing lady and a force of nature. After Dunedoo, the two women led a Christmas run to Gundy. “For a few hours we alleviated the misery and bleakness that these poor people face day in day out. “We played cricket, shared a beer, but most of all, we just listened. “I had ten kids sleep in my truck that night, all from wealthy backgrounds.

“They had their eyes opened that day. ” Other heavy lifters at On the Bandwagon are Tom Farrant, Emma Brock, Aaron Harpley Carr and Jacky from Hello World Travel, Lake Haven. On the last run, Brock organised two Ausgrid trucks for transport.

Harvey says her other key team members are husband, Rod and children, Shilo and Chase. And now, Harvey rides again. On December 14, she will lead a convoy of water, hay, food and toys to the smoky hamlet of Denman, two and half hours north west of Gosford, and will distribute goods from there to surrounding towns of Jerry’s Plains, Martindale and Sandy Hollow.

Gayna says she has had strong support from locals in Denman and that a big party awaits those who join the convoy. Anyone from the Coast is invited to join On the Bandwagon for the Denman run, but also to make donations of money or goods for the drive (call 0414 683 011 for more information).