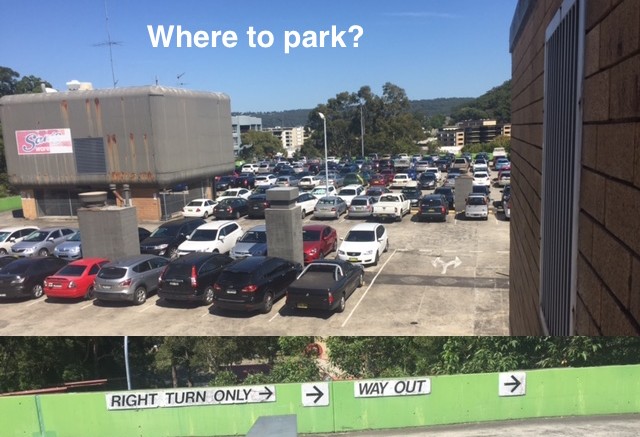 Kibbleplex parking still open, but for how long?

Gosford Erina Business Chamber (GEBC) is pushing for a new parking facility to be established near the corner of Erina and Albany St North, Gosford, with the eventual demolition of the Kibbleplex building set to rob the CBD of 600 car parking spaces.

The Lederer Group, which owns the building on Henry Parry Dr, has a Development Application under assessment with the State Planning Department which would see Kibbleplex demolished as the first step in the development of a $345.4M five tower residential and retail development on the site. Chamber President, Rod Dever, said the subsequent loss of parking in the heart of the CBD would put additional stress on commuters and local business people needing long term parking.

“Parking in Gosford and surrounds is always a point for discussion and one where members of the Chamber have requested appropriate actions to alleviate issues with access to business and access to parking for local businesses, ” Dever said. “One of our core issues is presently the number of commuters who leave the Coast daily for employment who then need to take up all day parking to facilitate their travel by public transport. “Gosford is a major transport hub but long term parking is limited.

“In 2018, the Chamber undertook a survey of parking and noted that local parking is filling up early. “In 2019, the introduction of parking sensors in the city seems to stop people overstaying in time limited parking, but it is not addressing the need for all day parking for city workers and commuters.

“With 600 spaces in the Kibbleplex building, the Chamber has for almost two years been engaging with Council for solutions to the eventual loss of this facility. “We understand that there is an extended lease on the facility. “However, we imagine now that the DA is progressing, that this lease would not be renewed.

“The Chamber has recommended that a new facility could be built near to the corner of Erina and Albany St North, which is less than 60 metres away from the Kibbleplex site. “Council already owns some land in this area but may have to acquire other land holdings. “The public and business (people) already park in this area so it has proven that this would be used but there also needs to be consideration to more than 600 spaces as the current parking is full most days now.

“We need to think for the future and have better facilities to support the city and our increasing population. “To create 1,000 spaces would allow for some growth and additional parking which is then not in an intrusive location and detracting to the city. ” A Central Coast Council spokesperson said that Council was investigating parking options, with a report expected to be handed down to councillors early next year.

“As a short-term strategy, Council has constructed a 190-space same level carpark at 10 Racecourse Rd and has line marked a 170-space carpark at Adcock Park, ” the spokesperson said. “These 360 spaces will be connected to the Gosford CBD through a Park and Ride (shuttle bus) service which is currently at the tendering stage.

“Once the tender process is complete, Council will promote the availability of these spaces and the shuttle bus service to the community. “Council is currently undertaking a Central Coast Parking Strategy which includes medium to long-term strategies to deliver additional parking stations.

“Council is conducting investigations into the feasibility of constructing additional parking stations within walking distance of the CBD and on the fringe of the CBD (as a Park and Ride station). “The Central Coast Parking Strategy and recommendations for new parking stations will be presented to Council in February/March 2020 for endorsement. ” Dever said transport services into the city also needed to be investigated.

“We need the Erina to Somersby corridor to have better point to point bus services to support park and ride options, ” he said. “This may also sit alongside paid parking and be acceptable, but we would not accept Sydney City rates for parking. “Action needs to commence sooner rather than later and be proactive rather than the typical reactive approach with a band aid solution, which fixes nothing. ”