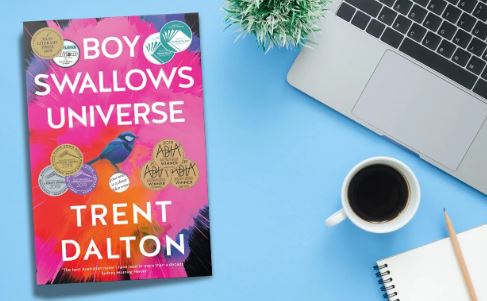 Boy Swallows Universe is a multiple award-winning novel about Eli Bell, a young boy growing up in 1983 in Darra, on the outskirts of Brisbane.

Eli lives with his mute brother August, his mum Frankie and her heroin-dealing boyfriend, Lyle. His babysitter is Slim, a convicted murderer in his 70s who Eli loves. His pen pal Alex is a member of an outlaw motorcycle gang currently serving time.

Eli has no trouble understanding August, while Slim thinks August has all the answers. When Lyle tries to use the boys to scam the drug lord, Tytus Broz, things go wrong – Lyle gets ‘taken care of’, Frankie is sent to prison, and Eli and August go to live with their alcoholic dad.

The story follows Eli as he tries to pick up the pieces of his life, infiltrates a women’s prison, uncovers an organized crime syndicate, falls in love with an older woman, and aspires to be a journalist. Eli wants to be a good person, but it is hard when there are so many bad people in the world. At first, I thought the story seemed far-fetched and it took me a while to get into. I was confronted by the drugs, the alcoholism, the violence – by innocent children surrounded by such dangerous adults. But the writing was so engaging that I persevered.

I’m glad I did. Its not your normal crime story, but a rich fusion of crime, family ties, adolescence and the role of older male role models. Author, Trent Dalton, puts all the trials of a teenage boy, such as being offered drugs and talking to girls, on display. Ultimately, it is a love story. It was only after finishing the book that I discovered Trent Dalton is a former journalist for the Courier Mail and now writes for The Weekend Australian Magazine. He’s a two-time Walkley Award winner and a four-time winner of the national News Awards Features Journalist of the Year.

As I read about Dalton’s earlier life, growing up in Queensland with a heroin dealing step-dad and the convicted murderer, Slim Halliday, as a mentor, I realized this story is not far-fetched at all, but autobiographical, told through his 12 year old alter-ego, Eli. Dalton’s three brothers are embodied in one – the mute savant August.

Dalton says the “research was remembrance” and “all of me is in there”. At its core however, it is a story for his Mum, a recovered drug addict who, like Frankie, spent time in prison. I get that now. What I don’t get is the red phone. I wish August, who has all the answers, would answer that one for me.