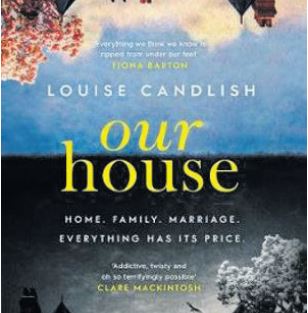 Our House by Louise Candlish

As part of the new-look Coast Community News, we are introducing book reviews! We put out our feelers recently for a book reviewer and received such an enthusiastic response from Kim Reardon .

Our House is a thriller set in modern-day London. Fiona (Fi) Lawson, a 42-year-old mum of two young boys, arrives home to find another family moving into her house.

The problem is, Fi hasn’t sold the house. The Vaughans show her paperwork listing them as the rightful owners and we soon discover the house was sold to them by Fi’s husband Bram.

The narrative utlizes a pod cast called “The Victim” to tell Fi’s story while at the same time using a suicide note to tell Bram’s story. In earlier times Fi and Bram both work hard to buy the house in a much sought-out suburb, a house that “sheltered us and protected us, but also defined us”.

Fi is a good wife and a good Mum. Bram is an outgoing guy who loves to drive fast, drink and stray on occasion – one time too many for Fi as it turns out. As a result of their separation and a booming property, it is the house itself that becomes the “breadwinner”.

The children remain in the home and the parents take turns to come to the house to raise the kids – a “bird’s nest custody”. Fi and Bram also rotate living in a separate flat when off duty. While they believe this modern family arrangement is best for the kids, their friends think it’s crazy. While Fi tries to get on with her life, a series of events and bad decisions snowball for Bram until he is forced to sell the house.

If Fi is the Victim, as the name of the podcast suggests that must make Bram the villain, right? But is Bram just someone that made a few bad decisions? The reader will be drawn to both Bram and Fi and wonder how the situation ends up with their house being secretly sold. Some parts of the story are a bit slow and the shifts between podcast and suicide document can be confusing at times, but it is worth persevering with what is a slow boil.

I became intrigued to see just how it would end, and I was not disappointed. The reader is left to wonder how well we really know our spouse? And do we equate the value of our house to the value of ourselves? As Fi says of the house she painstakingly remodeled, “if I had my time again I probably wouldn’t touch a thing. I’d concentrate on the humans. I’d re-purpose them before they destroyed themselves. ”