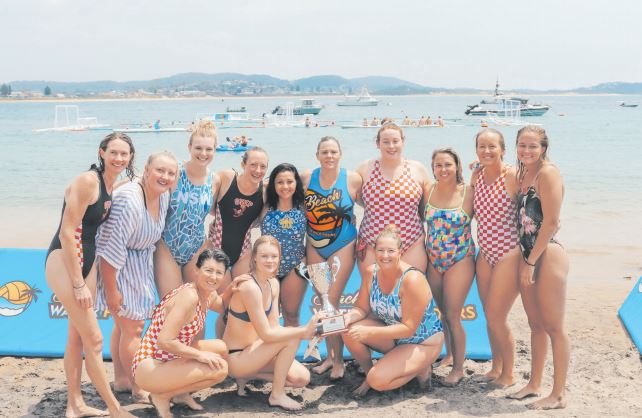 The blue and yellow colours of Beach Water Polo Fours brightened up Terrigal Haven on Sunday, December 15, for their first tournament of the season.

Fourteen teams from all around NSW were vying to be the champions of their respective divisions on a beautiful December day. The women dominated the morning as they played against club mates, friends and team rivals, and then all sat down to lunch together afterwards. Favourites, The Lobsters, were unable to claw their way back to claim the championship trophy from The Cacks, who won the grand final in straight sets, 2-0.

The Central Coast Lifeguards took a break from patrolling the beach to rally against some strong competition in the Mixed Social Competition. While some Cronulla girls Made it Over the Bridge for the mixed competition, they went back over the bridge trophyless, losing the grand final in a nail biting penalty shootout.

Rio Olympian, Keesja Gofers, and 5 times NCAA champion, Michaela Rosenthal, proved too strong in the penalty shootout that lasted almost 10 minutes and saw the Fours 6-8 team etched into the trophy.

As the sun went behind the clouds, the men came out to play with 6 strong teams looking to establish themselves early. While the local team Master and Apprentices started out strong, it was the Drummoyne team 1-2 WP Academy and Dad’s Army, ably led by Daniel Doohan, that lined up for the final game of the day. Local Jai McNamara claimed he was distracted momentarily by a large Bull Ray swimming beneath the field during the final, but in the dying seconds of the second set,

Dad’s Army was able to put away a goal to win the inaugural Central Coast event.

This is first time beach water polo fours has been played on the Central Coast and event organiser, Scott Nicholson, himself a former National League player, said the event was well supported by Central Coast Council and the local water polo community, and they will be back next year.