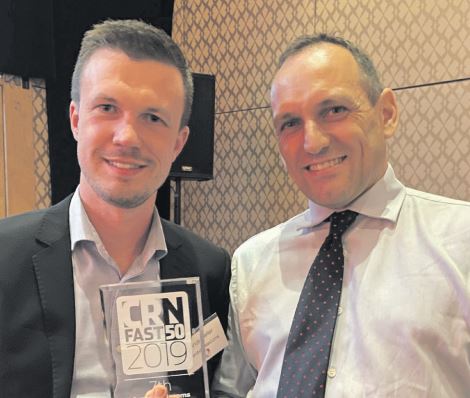 Regional telecom provider, Central Telecoms, based at Erina, has been named Top Telco in Australia at the recent CRN Fast50, held in Sydney on November 21.

With a growth of 101% for the 2018/19 financial year, Central Telecoms has made its debut on the CRN Fast50 (which is a listing for all tech companies, including Telcos), at number seven, making it the seventh fastest growing tech company in Australia as well as being the fastest growing Telco.

Founded at Erina in 2016, by Graeme Johnston and Andy Heller, the company also picked up one of six Young Leaders’ Awards for Heller, who is the second youngest leader to receive the award at just 31.

The two men started their company after meeting while employed by Optus. “I have been working in telecommunications for 20 years, ” Johnston said. “I started in the UK and then moved to Australia with my family seven years ago and worked for various big Telcos here before meeting Andy.

“We saw that the writing was on the wall with the bigger companies. “There was a bad customer service reputation and we saw an opening. ” In three years, the company has grown significantly and now employs 16 people. “This is a huge recognition for us, ” he said.

“Achieving the fastest percentage growth is a benefit of being a smaller company. “Previously Telstra pretty much had a monopoly on providing telecommunications, but the NBN was the best thing to happen for businesses like ours.

“It has been a game changer for us. “All the in-ground lines are now owned by the NBN and we are on a level playing field with the big Telcos, with access to all the support and systems that the big operators have access to. “One of the big frustrations we have heard from customers is being referred to overseas call centres.

“All calls to us for customer service are answered here in Australia. “Also, a lot of telecom companies call themselves internet providers, but simply rebadge other people’s services.

“We have purchased our own band width and we have our own infrastructure and network which means our customers can avoid congestion on the lines. ” Central Telecoms has so far grown its footprint to eight regional locations in NSW.

“The top 10 of the 2019 CRN Fast50 had its highest ever representation of businesses from outside Australia’s biggest cities, a reflection of the opportunities on offer beyond the big smoke and the clever entrepreneurs who capitalise on them, ” he said.

Customers not happy to wait for NBN upgrade

The Senate hears about NBN complaints