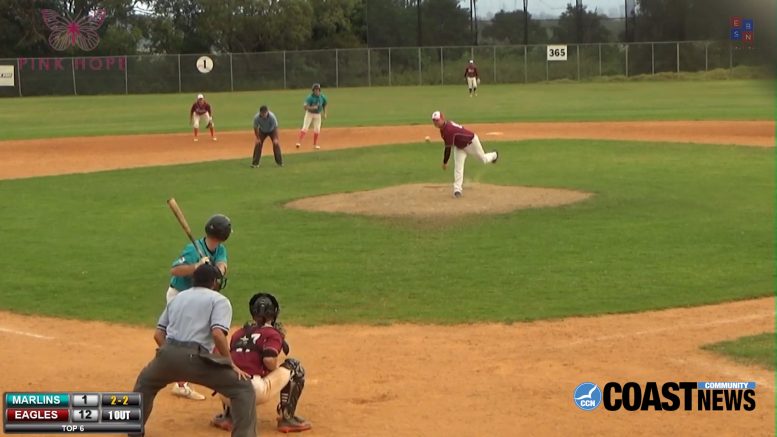 [Sport]You’re watching our first edition of Around The Grounds, a wrap on the weekend’s major sporting results on the Central Coast.

On Saturday, the Mariners final prospects were dealt a blow when they were defeated 2-nil by the Brisbane Roar, with second half goals to Roy O’Donovan and Scott Neville. Eunsun Kim and Matt Simon created several chances up front for the Central Coast only to be denied by the woodwork and Brisbane keeper Jamie Young.

The loss sees the mariners back in 10th position on the ladder with a bye next week and then an away match against Sydney FC.

[Cricket] The champagne corks were popping in Lisarow-Ourimbah on Sunday night after the Magpies took out the first piece of silverware of the 2019/20 season with a five wicket win over Warnervale in the One-Day final at Erina Oval.

Warnervale won the toss and batted first, posting 167 runs following a 74 run opening stand by Simon Keen and Tony Cornwell. Keen’s 52 came off just 29 balls. Bowler Matt Jones kept Warnervale at bay taking 4 wickets for 16 of just 7.3 overs. Lisarow-Ourimbah then got off to a shaky start and at one point were 4 for 75 before Magpies captain and Greg Smith Medallist, Blair Lindsay steadied the ship. Lindsay combined with all-rounder Matt Sunshine for a 95 run partnership to win the match with five overs to spare. In addition to some of the action, we also caught some never-before-seen footage of the Magpies performing their “swoop-down” team song.

Across at Adcock Park earlier on Sunday, the Central coast U12s had an emphatic win over Hunter Valley in the inaugural 2019-20 Greater Hunter Representative Competition. After losing their last encounter against Hunter Valley, the Central Coast chased down a modest total of 56, with rising stars Kobe Smith and Raj Sharma putting on an unbeaten 60 run partnership to take out the shield.

[Tennis] In tennis, the Gosford District tennis Club Championships began this weekend. Several of the Coast’s talented young players were on display on Saturday, including rising star Shannon Spencer who we clinched the Open Ladies championship from rival Eliza Zyryanova in straight sets 6-2, 6-2. We managed to catch a little bit of footage from the earlier pool match between Shannon and Eliza.

[Baseball] And finally, to baseball, and the Central Coast Marlins were comfortably defeated by the Manly Eagles in the first grade baseball competition on Sunday. The eagles won 12 to 6 at the bottom of the ninth. At one stage, the Eagles led 12 to 1, but a stand-up triple to Jackson Smith put the locals back into the game at the top of the 6th . That’s all for today.

For more sports news, check out the coast community news website. We’ll see you next Monday for the weekend’s sport wrap.

Central Coast United to be a new regional representative club

Three in and one out as Mariners 2021 squad takes shape