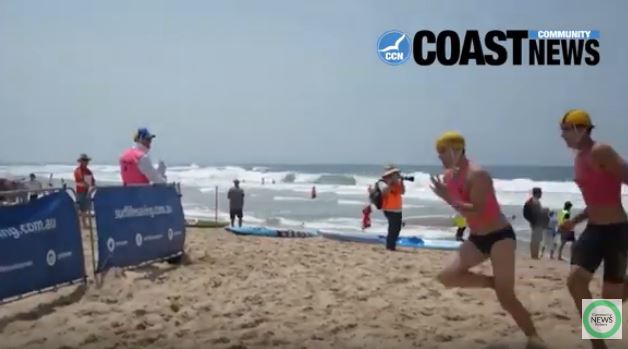 The wrap up of the weekend’s sporting competitions from across the Central Coast; tennis, baseball, surf life saving, football & cricket.

Last week, we covered the Gosford District tennis associations women’s final and this weekend it was the men in action.
Johnathon (Jono) Cooper kept rising star Bradley Simpson at bay to win the 2019 Open final.
In front of a vocal crowd, Cooper and Simpson traded blows for well over three hours in an epic struggle for the silverware, including a gripping super tie-breaker before Cooper prevailed winning 7/6, 4/6, 10-4.

The U16 Boy’s Singles final between Nick De Vivo and Jayden Shipley also produced some scintillating rallies.
De Vivo created great power off both the backhand and forehand, but Shipley dug in, moving De Vivo around the court, enduing many long rallies and producing several electric passing shots of his own.
De Vivo eventually took the honours, winning 6/3, 6/3.

40 competitors represented the Central Coast over the weekend at the 2019 NSW Interbranch Championships held at Bulli SLSC on the South Coast.
In challenging and technical conditions, the Central Coast Sand Crabs put on a fantastic performance taking on the best of the best in NSW.

There were many highlights from the weekend of racing, including Zoe Clarke who claimed the highly sought after Open Women’s Iron Person title.
On the sand, the Sand Crabs reached the magical 200 pts with four 1st places from Tahj Hamilton, Noah Nakagawa, Aymn Hamilton and Emelyn Wheeler in the beach sprint events.
Perhaps not quite as impressive was the team’s war chant – let’s hear it now.

That’s something that might need to little more work over winter.
In cricket, all four two-day matches ended with an exciting finish.
Narara Wyoming successfully defended a meagre score of 102, bowling Northern Power out for 75. Kyle Jordan took five for 32 off 16 overs.
In another low scoring encounter Kincumber Avoca grabbed the all-important final wicket to claim first innings points against Terrigal Matcham, Rob Lavery snaring that last wicket with the Bellbirds needing just 8 runs for victory.
And at Baker Park, Warnervale almost did the unthinkable, nearly chasing down Wyong’s massive total of 343. Brett Russell posted a dominant 124 before Warnervale fell 35 runs short at 308.
In the final match Lisarow Ourimbah had a big scare, narrowly defeating Southern Spirit by 27 runs – a 100-run third wicket partnership by Mitch Fiddock and Lachlan Cork almost unseating the competition leaders.

A win to perth Glory sees the Mariners fall back to the bottom of the A-League ladder as they sat out the bye this weekend. The Mariners will face Sydney FC away next week, before meeting Adelaide home on the 22nd.
And separately, Mariners CEO Shaun Meilekamp confirmed the Mariners have submitted a formal proposal to Central Coast Council regarding the Management Rights of Central Coast Stadium.

This news comes three years after a major proposal was made by the Mariners three years for a major redevelopment of the Stadium and surrounding areas. We’ll bring you more on that in coming weeks.

We close this week with baseball and the Central coast Marlins leapt back into the winners circle on Saturday with a big 17-1 win over Penrith. The win included this swing for the fence.

And an enticing game is looming in two weeks when the Marlins will host Cronulla at Baseball Park.

Sports report – Around the Grounds