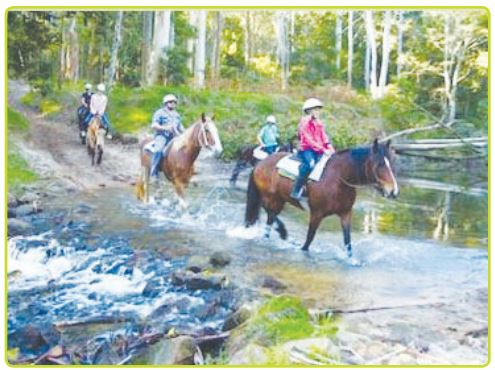 Glenworth Valley Outdoor Adventures wants to change its zoning so that its existing horse riding school, which has been operating on the site since it was originally approved in 1969, is permissible again.

As a result of changes to local planning rules over many years, the riding school is no longer permissible with the E2 environmental conservation zone which applies to the land.

The continuation of the school is allowed under existing use rights, but expansion is difficult. The site had subsequent approvals for music festivals, paintball and quad biking, but after 2006, the rules changed again, and these developments were no longer permitted. Then in 2013, council approved three motel units and five caravan, or relocatable cabins on land when it was zoned scenic protection.

The land was later rezoned RU2 rural landscape and the proposal was given in principle support, but didn’t progress. The Glenworth Valley Pastoral Company now wants to amend that proposal to include entertainment, food and drink as permitted uses for an existing multi purpose building and the same for surrounding cleared areas nearby to allow, for example, a wedding ceremony outdoors.

The matter came to the council meeting on November 11 and councillors decided to visit the site before making any decisions. Council staff said the request for an amended planning proposal opened up the existing proposal for reassessment as well.

“Should council resolve to proceed with the amended planning proposal, it will require council to request an amendment to the Gateway Determination from the Department of Planning, Industry and Environment, ” the report said.

It went on to say that the land represented a significant holding of environmentally important land, relatively isolated with limited access and characterised by a cleared valley floor with vegetated hillsides and ridgelines. It contained a number of pockets of endangered ecological communities and regionally significant vegetation and was also an established tourist destination with its close proximity to Sydney, making it a desirable destination for a wide tourism market, including international visitors.