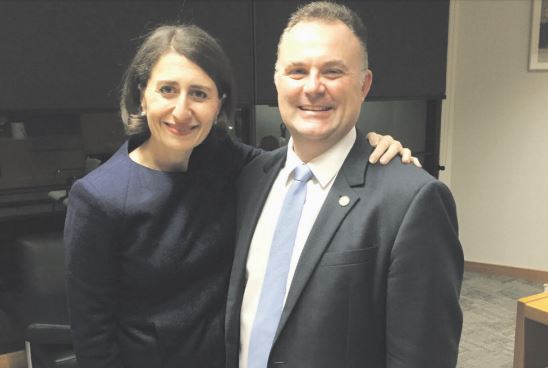 Member for Terrigal, Adam Crouch, has been appointed Parliamentary Secretary for the Central Coast.

The surprise move, announced on December 19, follows the axing in March of Parliamentary Secretaries. Crouch said he was honoured to take on the role which he said would provide additional opportunities for the Coast’s needs and wants to be aired at the highest level within the State Government.

“This is a fantastic opportunity and I look forward to further supporting people and organisations across the Central Coast in my new role as Parliamentary Secretary, ” he said. “The Central Coast is a growing region, with the NSW Government committed to upgrading infrastructure and delivering more services.

“Between 2016 and 2036, there will be an additional 75,500 people calling our region home. “This is a challenge that requires all levels of government to work together. “Our Government’s key achievements to date include the redevelopment of Gosford and Wyong hospitals, half a billion dollars for State road upgrades, revitalising the Gosford city centre and unprecedented levels of funding for local schools. “In the last two years alone, Central Coast Council has received more than $90M in grant funding from the NSW Government.

“It is my mission to ensure that our region continues to receive its fair share of funding, now and into the future. ” Berejiklian said Crouch had shown “a huge amount of passion and dedication for the Central Coast”. Central Coast Mayor Lisa Matthews has welcomed the appointment and said Council had been advocating for a Minister for the Central Coast, or the reinstatement of the Parliamentary Secretary role, since it was abolished in March. “The role of Parliamentary Secretary is critical for Council and the State Government to collaborate effectively, ” Cr Matthews said.

“This role is a crucial pathway into government, ensuring relevant departments and ministers are aware of the important work we are doing and the opportunities to work more effectively together to deliver for the entire region. “We are one of the biggest and fastest growing regions in NSW and we need a seat at the table to ensure we get our fair share of funding and opportunities that our community needs and deserves.

“While our preference was for the Central Coast to have its own Minister, as we believe we are big enough and important enough to have one, this is important recognition by the State Government. ” Cr Matthews said she would prioritise a meeting with Crouch in the New Year.

Gosford Erina Business Chamber, which has also been pushing for the role to be reinstated, has applauded the move. “The announcement is seen as a positive response to the business community from the NSW State Government, ” Chamber President, Rod Dever, said.

“The appointment reinforces the Premier’s words that the Central Coast is important to the government and is certainly on the government’s radar. “Having a Parliamentary Secretary for the Central Coast allows for greater representation and provides a stronger voice for the region. “The Coast has so many projects which require continued focus, including the Gosford City Redevelopment, which cannot be left lagging. ”

Regional Development Australia Central Coast (RDACC) Chair, Phil Walker, said RDACC had also been advocating for a dedicated Parliamentary Secretary for the Central Coast for the past two years. “It’s vital that our region is represented and supported at this level of Government, ” Walker said. “This appointment gives the people of the Central Coast a direct voice in decision making and will ensure enhanced outcomes for local business and industry, ” he said.

Walker said the move acknowledged the significant economic development potential of the Central Coast. “The Central Coast is growing exponentially, ” he said. “As our region continues to expand and innovate across the food, beverage, agricultural and development industries we need to ensure our infrastructure and services are upgraded accordingly. “We are thrilled the NSW Government is committed to this.

“Mr Crouch has passionately supported the people of Terrigal since 2015 and I wish him every success in supporting the greater Central Coast community as Parliamentary Secretary. ”.