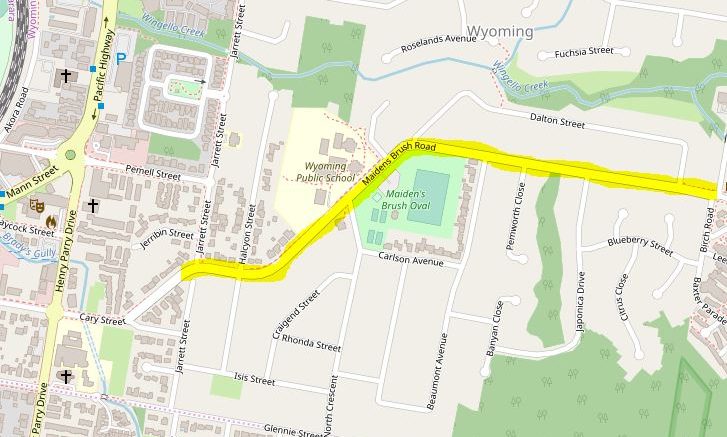 Maidens Brush Road Roadworks is one of several roads set to be improved with the funding. Map: OpenSteetMap

Major roadworks at Avoca, Saratoga, East Gosford, Copacabana and Tascott will be completed by 2025, thanks to a $70M roads package to be undertaken by Central Coast Council and fully funded by the Federal Government.

Councillors approved 29 road projects across the region at Council’s November 25 meeting, with works to extend from the Peninsula area to the far north of the LGA. The $70M was pledged by the Federal Government in the lead-up to this year’s election and Council officers worked with government representatives to develop Project Proposal Reports (PPRs) which meet funding criteria.

A report to Council said finalisation of the PPRs, which detail items such as project scope, design development considerations, project cost, risks and delivery strategy, was nearing completion, with the execution of funding agreements imminent.

Mayor Lisa Matthews said she was pleased to see the government deliver on its promise to fund local road upgrades on the Coast. “This $70M funding injection from the Federal Government will allow Council to deliver projects that the community has identified as priorities, ”

Clr Matthews said. “Roads are a key priority for Council, with more than $240M in projects delivered over the past three years.

“Maintaining and developing our region’s extensive road network, spanning 2,200 kilometres, requires all levels of government to work together. ” Consultation with the community will occur in the finalisation of design drawings stage and/or prior to the commencement of construction works for individual projects.

A long-awaited upgrade of Steyne Rd at Saratoga, from Bay Wharf La to Irwan St will be undertaken at a cost of $11.3M, incorporating pavement reconstruction, kerb and gutter work, a footpath, street drainage and access improvements.

East Gosford will see a $6.6M upgrade on Lushington St, from Henry Parry Dr to Coburg St. At Copacabana, there will be a $10M project to reconstruct pavement and update kerb and guttering, footpaths and street drainage on Del Monte Pl, from Segura St to Oceano St. Del Monte Pl was voted one of the worst roads on the Coast for safety in the statewide survey, Rate Your Road, conducted by the NRMA in March.

Ridgway Rd at Avoca will see a revitalisation from the Round Dr to Cape Three Points Rd, with new pavements, kerb and guttering, traffic calming devices and street drainage to the tune of $7.38M. At Tascott, Glenrock Pde will see a $1.5M reconstruction between Berala Ave and the Koolewong Station railway crossing.