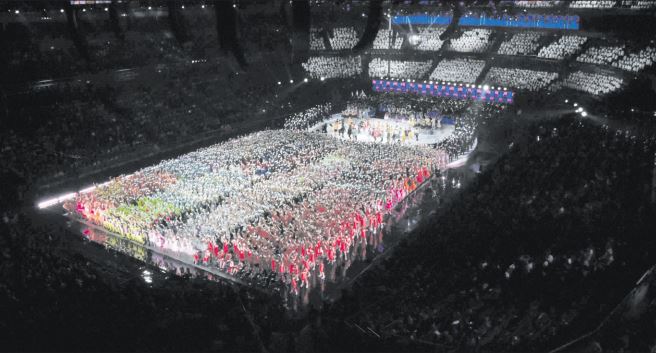 Performers at the 2019 Schools Spectacular

Hundreds of students from the Central Coast returned to school on November 25 with stars in their eyes after triumphant performances during the Schools Spectacular over the last weekend in November.

Over 5,000 student dancers, vocalists, choir members, puppeteers and aerialists, took to the stage with support from a 100-piece symphony orchestra and 20-piece stage band for a series of matinee and evening performances over the two days.

Students from Wamberal and Kariong Public Schools and Gosford and Kincumber High Schools took part, with Schools Spectacular Creative Director, Sonja Sjolander, saying everyone who was part of this year’s Schools Spectacular should be applauded. “This year our theme was STARS, ” Sjolander said.

“Everyone truly lived up to their star billing. “They really shone and together our galaxy of stars made the 2019 Schools Spectacular a show to remember, ” she added.

The students were a part of the 2,800 strong combined choir.

Sjolander said audiences of around 30,000 across the four performances were thrilled with the trademark colour, outstanding talent and variety on which the Schools Spectacular has built its reputation.

“They were entertained by a kaleidoscope of music ranging from time-honoured classics through a nostalgic 90’s mashup to the latest hits that have the kids in the audiences singing along.

“A highlight was the 80th anniversary celebration segment of the Wizard of Oz, exclusively featuring students from rural and remote areas of NSW.

“We’re so proud of the learning opportunities that we can offer to our NSW public school students through the Schools Spectacular, ” Sjolander said. “Whether it was students enriching their passion to perform, the excitement of being part of the world’s biggest amateur variety show or just building their credentials, every star returns home with knowing they worked with some of the entertainment industry’s best, ” she said.