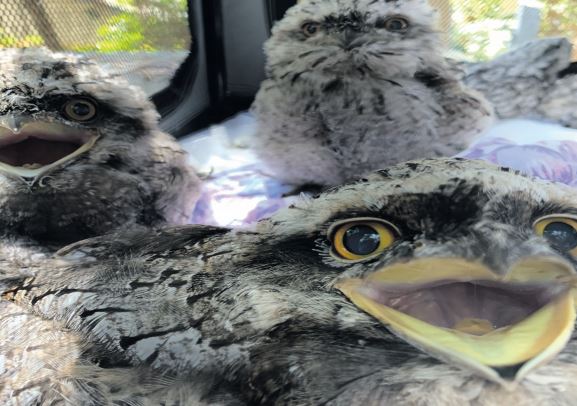 Surviving birds of a domestic cat attack are cared for by local Wildlife Arc volunteers.

The Tawny Frogmouth population of Pearl Beach is under threat, with 10 deaths in the last year, according to a pair of local wildlife carers.

Wildlife Arc carers Mr Michael Dahlstrom and Ms Augusta Miller say the most recent deaths were a healthy breeding pair killed by a domestic cat in late October. The carers, who specialise in Tawny Frogmouths, are now caring for a surviving chick, which Ms Miller named Spoon after it spooned itself into her hand when it came into their care.

The orphaned female suffered extensive wounds following the attack, but the couple are hopeful she will make a full recovery. According to Mr Dahlstrom, the initial prognosis was poor with only Ms Miller believing Spoon would pull through.

“It wasn’t looking good when she first came to us. “The bacteria in cat saliva is toxic to birds and she had been bitten multiple times, so I didn’t have much hope, ” he said. But Ms Miller spent a week administering around the clock care and a course of antibiotics to the chick and, while she isn’t completely out of the woods, Spoon’s future looks bright.

They said Tawny Frogmouths were threatened by domestic pets, collisions with cars, poisoning and habitat loss. Mr Dahlstrom said Pearl Beach’s population in particular had an extremely high mortality rate with the carers now concerned that releasing Tawny’s back into the area could be a death sentence, with the decision already made to release Spoon elsewhere when the bird is able to fend for herself.

“For Pearl Beach, car collisions are a major problem. “Tawny’s get struck by cars while hunting. “They get disoriented by headlights and then don’t react in time to avoid getting hit, ” Mr Dahlstrom said. Tawny’s on the ground don’t fare any better.

“A Tawny on the ground will rely on its natural camouflage as its defence (they bear a striking resemblance to tree bark), but if they’re on the road that won’t help them, ” Mr Dahlstrom said. Mr Dahlstrom said the birds also suffered from secondary poisoning as a result of snail and rodent poison. “If you’re using either of those poisons, you’re killing birds, ” he said.

Domestic cats were also notoriously problematic for native wildlife around Pearl Beach. “As a wildlife carer it is really quite horrifying having to clean up after someone’s cat or dog has just decimated a native species, ” he said. Mr Dahlstrom also noted that the recent push to have koalas introduced to Pearl Beach could be disastrous given the number of cats left unchecked.

Mr Dahlstrom said the other big issue facing the birds was the well-meaning people that separate parents from fledglings. “We have almost a dozen Tawny chicks in our care at the moment and only three of them actually needed care, the rest were just fledglings that had fallen from the nest or failed their first flight, ” he said.

According to Mr Dahlstrom, delivering these birds to vets was actually doing more harm than good. “The best place for a Tawny chick is with mum and dad. “If a fledgling is on the ground, its parents are nearby. ”

This article appeared first in The Peninsula News print edition 482