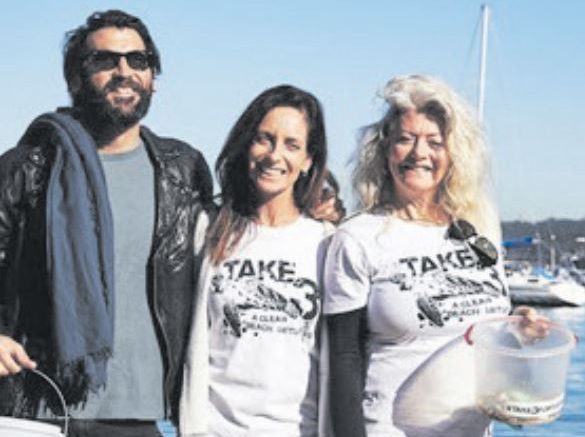 Long Jetty based grassroots initiative turned global sustainability movement, Take 3 for the Sea, has been recognised for its sustained, environmental conservation efforts with a slew of awards and nominations throughout October.

It’s been a big month for Take 3 Co-Founders, Roberta DixonValk, Amanda Marechal and Tim Silverwood, who received the Inspiring Change Award at the 2019 World Whale Conference.

This award recognises inspiring change in human behaviour to benefit cetacean conservation and was followed up by a Coastcare Award at the 2019 NSW Landcare Awards in Broken Hill.

Take 3 was recognised as Landcare Champions for its education programs that inspire participation and environmental conservation.

Take 3 were also named finalists for the prestigious Green Globes Lifetime Achievement Award, the NSW Government’s premier environmental awards, with the winner to be announced in late November.

“After 10 years of hard work and dedication to bring awareness and action to plastic pollution and waste, I’m so proud and humbled for Take 3 to be recognised with these awards, ” said Take 3 CEO, Silverwood. Marechal and Dixon-Valk concurred.

“It’s an honour to have even been nominated for these awards, let alone to win. “We are so humbled to have our passion to deliver education to youth recognised to this extent, ” said Marechal.

“For Take 3, recognition by these prestigious awards validates and highlights our message of personal responsibility for cleaning up and minimising our plastic footprint on our planet, so with these awards and nomination, we will continue connecting people to the planet, ” DixonValk said.

Whilst only recently basing their operations at Long Jetty, since 2009 Take 3 has delivered education programs to 350,000 students from 400 schools, 40 surf clubs and countless communities around Australia.

Take 3’s consistent efforts in sparking behavioural change has seen its global movement of over 300,000 followers remove over 10 million pieces of rubbish from the environment every year.

Students raise funds for Take 3 for the Sea