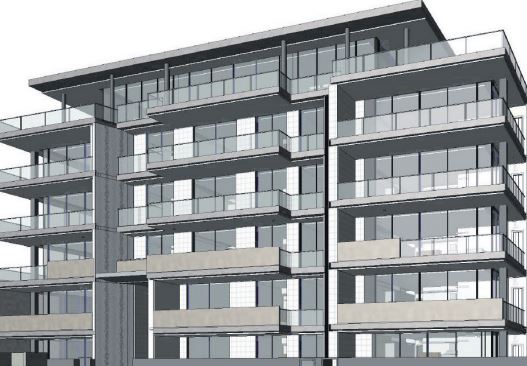 An artist’s impression of the approved development

A $19.8M seven storey apartment building in Albany St, Pt Frederick, has been given the final go ahead by Central Coast Council.

Modifications also included some internal and external changes and the addition of a swimming pool in the approved communal open space area. A Statement of Environmental Effects (SEE) lodged in support of the latest modifications said the proposal remains substantially the same as the development for which consent was originally granted.

“(The application) makes a number of design improvements to the original approved plans which are generally consistent with the scale and design of the development already approved by Council, ” the SEE says.

“The proposal does not result in any adverse impacts on surrounding properties and will positively contribute to the site’s location. ”

The modified development will see two basement parking levels, with a pedestrian pathway at ground level between a communal open space area at the rear and a northern side landscape courtyard, and linking with the pedestrian pathway to Albany St.

The ground level will also see the swimming pool and associated pool decking, fencing and landscaping in the open space area, with residential units to comprise the remaining storeys.