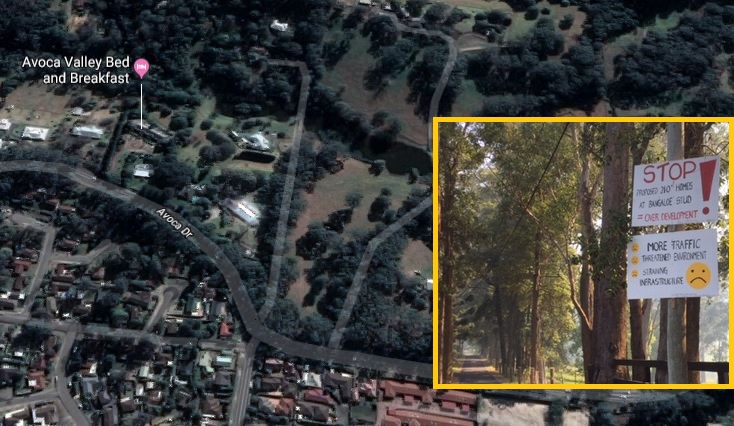 A proposal for an over 50s lifestyle resort on the site of the former Bangaloe Stud at Avoca has rung alarm bells with the newly formed Kincumber and Picketts Valley Community Action Group (KPVCAG).

Choice Living Avoca Developments, owned by the same directors who own Living Choice Australia, has confirmed that is in the process of preparing a Development Application (DA) for the resort on a 24ha site at 255 Avoca Dr, Kincumber.

The company says the project is consistent with industry research and statistics from various government agencies which identify a need for a greater housing choice to meet the demands of an ageing demographic.

“With 40% of the Central Coast’s population over the age of 50, this development will provide a new level of housing supply of an appropriate type and scale, ” a statement from the company says. “The creation of jobs during construction, after completion and for future local businesses is seen as a positive. ”

The company says the development is being designed to complement the surrounding area with an understated, contemporary design which respects the rural setting. It is in the process of preparing Social Impact and Economic Impact assessments and invited 170 surrounding properties to comment on the development by personal letter in September.

“Those comments and those of other interested parties are currently being assessed and alterations to the plan are occurring as a result of this consultation, ahead of DA lodgement, ” the statement says.

The company says around 35% of the site will be developed, with the remaining 65% to comprise existing vegetation and landscaped areas. But KPVCAG is concerned about possible impacts of the development on the surrounding suburbs of Kincumber, Picketts Valley, Avoca Beach and Terrigal.

“We are very concerned about over-development in the area, the urbanisation of rural land, a further strain on the traffic using Avoca Dr, and the impact of such a large development on the environment, wildlife and the Avoca Lagoon Catchment area, ” the group’s website says.

“Those properties that share common boundaries with the proposed site will have to contend with traffic and noise (from) 400-500 cars from new houses, visitors and employees who exit and enter the site. “The wider community using Avoca Dr, Scenic Hwy, Picketts Valley Rd, and Melville St will find further delays on already struggling roads.

“We are concerned about one possible proposed construction zone being in Picketts Valley Rd and a final entry and exit to the new estate being in Avoca Dr opposite Melville St.

“The two sites are already traffic black-spots. “We strongly believe that the density of 210 manufactured houses and infrastructure on the proposed site is not aligned with the ‘low-impact rural housing’ that is specified in the E4 Zoning in the Gosford Local Environment Plan 2014. ”

The DA is expected to be lodged in coming weeks.

‘Character statement’ may be developed for Council wards