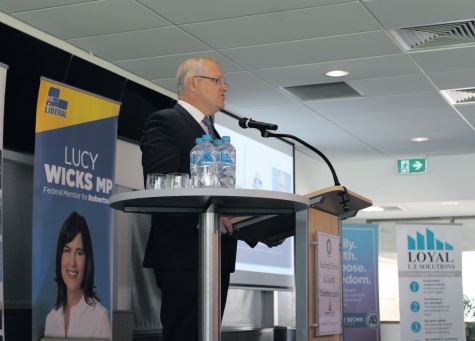 Prime Minister Scott Morrison reaffirmed the Federal Government’s commitment to investing in the Central Coast region during a brief but largely unremarkable visit to Gosford on November 12.

Morrison popped into town to be keynote speaker at Gosford, Erina and Coastal Chamber of Commerce’s November luncheon meeting, en-route to Canberra, where he was expecting an update on the dire bushfire situation which continues to ravage NSW.

He told around 250 attendees that local businesses were “the beating heart” of any community and noted that the Central Coast region had seen 1,500 new businesses start up since 2015. “This government believes very passionately in small business,” he said.

“A strong regional economy is the only way to guarantee the provision of essential services, things like roads and schools, and we are strong on investing in small business to give it a chance to grow.” “This is an incredible environment and you all get that,” he said. “More and more people are also getting it and moving to the Coast.

“We have big plans for the Coast which we will continue to roll out.” Morrison highlighted the government’s commitment to the $72.5m Central Coast Clinical School and Research Institute now under construction at Gosford Hospital, jointly funded by the Federal Government and the University of Newcastle.

He also highlighted government commitments of $70M in road upgrades, $1.6M on the M1 upgrade and $35M for commuter carpark upgrades at Gosford and Woy Woy. Member for Robertson, Lucy Wicks, who introduced Morrison at the meeting, said: “The desire to drive investment in Gosford like the university campus was a vision long before I became the Member for Robertson,” she said.

“Providing opportunities for people to work where they live is what drives me and I know drives the Prime Minister.” Chamber president, Rod Dever, said the Prime Minister had shown a real understanding of regional issues. “He made it clear we were on his radar and that we are no longer the forgotten Central Coast,” Dever said.

The Prime Minister was not available for questions from the media despite our many attempts to ask more specific local questions.