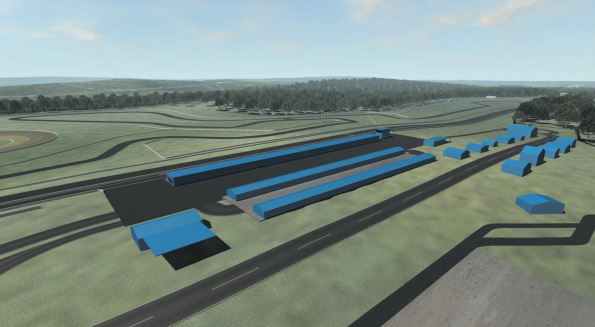 A concept plan of CASAR Park

Announced in 2010, CASAR (Community Automotive Sport and Recreation) Park was the brainchild of local community minded business people who were passionate about making a difference for the people of the Central Coast. The proposed site is a 140 hectare parcel of land at Bushells Ridge, with the project planned to be completed in two stages.

Once completed, it was predicted the Park would generate around $20M annually and contribute around 200 jobs and 150 indirect jobs to the local economy, as well as establish a dedicated automotive training and work experience program onsite.

Combining their expertise, technical knowledge and links to the community sector, the CASAR Park Board have been committed to their vision of establishing a sporting icon and beacon of social entrepreneurship, but almost a decade on, government legislation changes and associated additional expenses have thrown what could be the final spanner in the works.

After three years of planning, the CASAR Park DA was first lodged in 2015, with the project hitting its first snag when land zoning issues arose from the draft Central Coast Regional Plan. Prepared by the former NSW Department of Planning and Environment, now the NSW Department of Planning, Industry and Environment, the draft plan identified Bushell’s Ridge, including the project site, as a significant new employment zone and the project site was even rezoned as a special type of industrial land that specifically allowed for a motor sport facility.

But due to the ecologically sensitive nature of Bushells Ridge, it was unclear if the zoning would hold up. This matter came to a head in 2016, when the NSW Government announced that it was considering a new framework for its Biodiversity legislation. With limited funds and a number of studies already in the works, the Board was forced to halt their progress, lest they be required to foot the bill for a second lot of studies under the new framework.

That left them sitting on their hands until the State Government determined that the Central Coast was temporarily exempt from the newly passed legislation until November, 2018. Following the determination, the Board then needed to complete seasonal species studies at the site and some engineering plans before compiling their final report to satisfy Council’s DA assessment. However, this meant that the Board needed to fundraise a further $100,000 to complete the process and secure development consent. The wheels fell off when they were unable to do so and they had no choice but to withdraw the DA.

“It was a little over nine years ago that a small group of passionate locals sat down to sketch out a vision for a precinct like no other in Australia. “It was to be the pinnacle of social enterprise, matching a genuine need for programs to address youth unemployment with the exciting business of motor sport.

“Since that time, we’ve had hundreds of meetings with interested stakeholders being individuals, clubs, business, government, taking over thousands of volunteer hours. “But despite those years of knocking on doors, it has simply been impossible to raise the funds necessary to complete the required ecological assessments and so we have had to withdraw our DA, ” said CASAR Park Co-Founder, Brad Wilson.

According to Wilson, the withdrawal spells the death of the Park’s social enterprise model, with a purely commercial model now the only option for the project to progress at this point. “At various stages over the years, some individuals have expressed interest in the project, not as a social enterprise but as a commercial venture, and so it is to those people that we will be returning over the coming weeks, ” Wilson said.