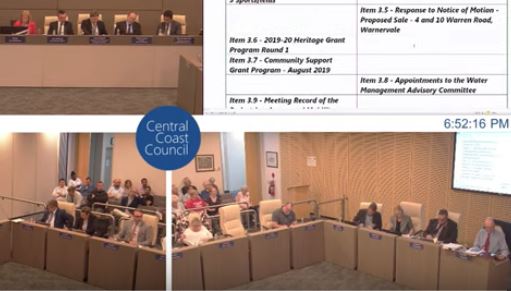 Central Coast Mayor, Lisa Matthews, intends to put together a slideshow highlighting councillors’ “disgraceful behavior” at Council’s November 11 meeting and show it to them.

It was also twice interrupted by loud noises suddenly emanating from digital technology and Councillors Chris Holstein and Greg Best juggling their devices to turn down the sound.

“We are supposed to be leaders of our community making huge decisions and yet we can’t keep our behavior controlled, ’’ she said after the meeting, where she told councillors their behavior had gone from “bad to woeful”.

“I have asked the CEO to review last night’s footage and a couple of other meetings and put together a slideshow and call a meeting and show them their behavior, ” she said.

“I am going to ask them if they would display that sort of behaviour at the dinner table. “Would they say that in front of their children? “I know they are baiting me sometimes in the hope that I will throw them out, but I won’t throw them out.

“We have a code of conduct and often their behavior is borderline or almost there. “I will stop the meeting, which I can do under the rules. “I will do that. “We cannot go on like this. “It is crazy behavior.