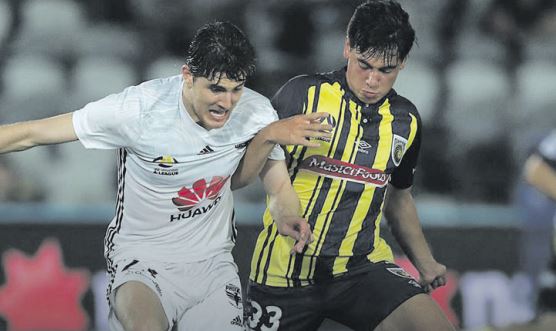 Mariners Academy product, Lewis Miller, has been rewarded for a strong preseason and FFA Cup showings with a Central Coast Mariners’ scholarship contract.

Speaking ahead of the club’s round one loss against the Western Sydney Wanderers, the 18-year-old said it was an exciting step forward for his football career. “I’m honoured to represent a club with such history and I hope that I can contribute during this season and help the club to continue forward and upwards, ” Miller said.

“Having been here for a couple of years, it is great to be rewarded like this, and it has been tough working to match the pace and intensity of training with the First Grade squad. “But staying in this environment and being around the leaders and elite defenders we have has helped me to improve my game and work towards this opportunity, ” he added.

Miller played 93 minutes in the FFA Cup Round of 16 clash that the Mariners won on penalties, and Head Coach, Alen Stajcic, praised the work ethic and commitment that has seen him now rewarded with the Scholarship.

“Lewis is a great kid, and this is just reward for the hard work he has put in both on the training ground and on the pitch. “It’s important that we reward our talented young players, so this is a good stepping stone for him and Mariners’ fans can know that he is certainly a player to keep an eye out for moving forward, ” Stajcic said.