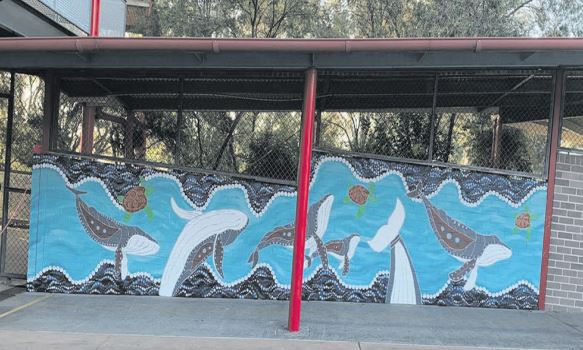 ‘Migration’ is the first in a series of murals being installed at Kariong Public School by Aboriginal artist, Garry Purchase

Kariong Public School has become the canvas of one of Australia’s most celebrated Indigenous artists, Garry Purchase, who has been tasked with installing several murals around the school.

Purchase is a proud Aboriginal man of Dharawal, Bidjigal and Dhungutti descent, who grew up in Sydney’s Eastern suburb, Botany, and was raised amongst the Aboriginal community of La Perouse.

His great uncle is Joe Timbery, world champion boomerang thrower who also presented one to Queen Elizabeth II in 1954. Purchase first picked up a paintbrush in 2013 and jokes that since then he has never put one down.

After quickly developing his own modern take on traditional Indigenous art, he rapidly gained traction in the Indigenous art circuit and has since grown a loyal following across the country and abroad as he continues to steer his art away from more traditional concepts associated with Aboriginal art as a catalyst artist redefining the genre.

Purchase unveiled his first completed mural in the weeks leading up to the October school holidays. Entitled ‘Migration’, the piece depicts his favourite animal to paint, the whale, as well as turtles. “I’ve really enjoyed brightening up their playground and look forward to creating more beautiful murals around the school over the coming months, ” Purchase said.