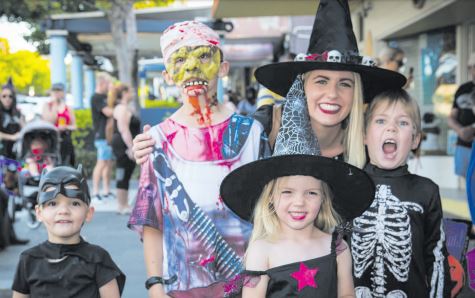 The Fright Night event at The Entrance attracted huge crowds.

Around 15,000 trick-or-treaters descended on The Entrance on Halloween (October 31) for the Central Coast’s biggest Halloween party and first ever Fright Night.

An initiative of The Entrance and District Chamber of Commerce to help reactivate the suburb’s ailing business and tourism sector, Fright Night was pitched by Chamber Vice Chair, Belinda Katalinic, as a whole new take on the American holiday that has grown rapidly in popularity across the Coast.

According to Katalinic, the idea was to make a safe ‘Halloween hub’ for families, with one of the biggest concerns about the holiday’s adoption in the country being the army of children wandering around unknown streets and visiting strangers’ homes to trick-or-treat (sometimes unsupervised).

Katalinic teamed up with local business owners and legendary Halloween purveyors, The Grey family, to transform The Entrance CBD into a spooky smorgasbord of costumes and candy and invited families from across the Coast to take part in a controlled trickor-treating environment with special Halloween deals, roaming entertainment and one off activities like ghost tours and The Grey’s biggest ever Haunted House, all adding to the fun.

The initial response to Fright Night had been positive but nothing prepared Katalinic or the rest of the CBD for just how popular the event would be. “We estimated around 6,000 people would attend so we were completely blown away when an estimated 15,000 people turned up on the night, ” she said. The huge turnout, while encouraging, did cause some issues across the board, with longer than expected wait times for activities, especially The Grey’s Haunted House, which ran in group sessions.

But long lines appeared to be the event’s only hitch and the community response has been so positive that the Chamber has committed to bringing Fright Night back in 2020. “Thank you to everybody that came out and supported Fright Night and thank you got being such good sports. “We know the lines were very long and we’ve done a full debriefing to make sure next year’s event is more streamlined, ” Katalanic said.