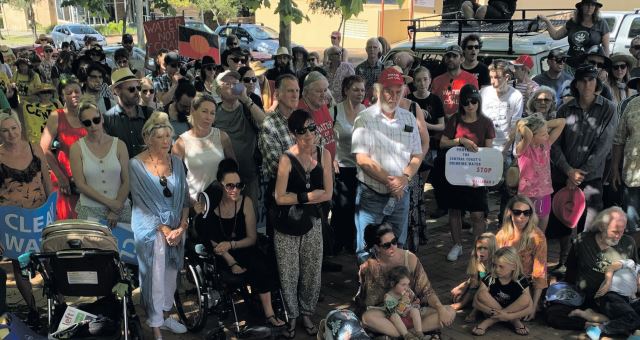 The Community Environmental AlIiance rally in Wyong, protesting the Wallarah 2 coal mine

Central Coast Greens MLC, Abigail Boyd, introduced the Bill to the NSW Parliament Upper House in October and it is due to be debated on November 21.

“If passed, this Bill will protect our drinking water here on the Central Coast and prevent the Wallarah 2 coal mine from proceeding, ” she said.

“The Wallarah 2 coal mine will consume gigalitres of our drinking water supply and threatens its contamination, with clean up possibly taking up to 30 years, ” said Boyd. “It poses significant threats to the waterways that form the Central Coast water supply system at a time when our water reserves are already being depleted at an alarming rate across the state.

“The Sydney and Illawarra water catchments already have the benefit of special protections and are within the remit of Water NSW. “So why not the Central Coast?

“Nowhere else in the world would this be allowed to happen. ” During her speech introducing the Bill, Boyd slammed the Liberal Party over the approval, bringing up Barry O’Farrell’s now infamous promise that the Liberals would not approve Wallarah 2.

“Protecting the Central Coast from Wallarah 2 was the subject of an election promise from the Liberal Party in 2007 and 2011, and the Labor Party in 2015. “In a statement that the Liberal Party will not be allowed to forget, on February 28, 2008, Barry O’Farrell, (then leader of the Opposition), addressing a rally against the Wallarah 2 coal mine, said the next Liberal Government: ‘will ensure that mining will not occur on the Coast or in any water catchment area and ensure that mining leases and exploration permits reflect that common sense’.

“Prior to the 2011 election it was also stated in Liberal Party policy that there would be no coal mining in the Wyong water catchment valleys.

“Almost a decade after the ‘no ifs, no buts’ guarantee given to the Central Coast community, in the face of sustained community opposition and the evidence mounting about the dangers of invasive, destructive, water intensive longwall mining, this Bill gives the government the chance to finally make good on the Liberal’s promise, ” Boyd continued.

Boyd also criticised the Liberals for putting the onus on the mine operator, Kores, to ensure the catchment is not polluted. “The government will say that the 200-plus conditions placed on the mine, that rely on Kores to do the right thing and ensure they don’t accidently pollute or deplete the drinking water, is sufficient protection.

“One of those conditions allows the mining company to recycle mine water back into the catchment. “(They’re) trusting Kores to ensure the water will be a quality fit to drink, without anyone even asking the community if they are okay with that, ” Boyd said.

“The community still has very little information about how it’s water supply will be protected from the discharge of 300 gigalitres of treated mine water per year. “Mine water is salty and it contains heavy metals. “To what standard will that water be cleaned before release? “How will it be cleaned and what will become of the toxic sludge left over?

“This Bill will fix that flaw, at least when it comes to Wallarah 2. “Water is Life, and even Barry O’Farrell knew that when he proudly wore that ‘Water Not Coal’ t-shirt all those years ago, ” Boyd said. Meanwhile, on October 31, the NSW Government released the final report of the Independent Expert Panel for Mining in the Catchment, which was established in February, 2018, to provide advice on the impact of mining activities in the Greater Sydney Water Catchment, with a focus on risks to water quality and cumulative impacts.

Planning and Public Spaces Minister, Rob Stokes, said the panel made 50 detailed recommendations which the government would review and respond to in due course, but “in the interim, no new development applications for mining in the Special Areas (of the Sydney catchment) will be determined”.

The Department of Planning, Industry and Environment will now consult with key agencies including WaterNSW, the Resource Regulator and NRAR as well as external stakeholders to develop a plan of action.

Wyong MP, David Harris, a long time campaigner against the mine, said obviously there are concerns about water loss in the Sydney catchment, and we are looking for anything in that report to help us have extra conditions applied to the Wallarah 2 mine.

Another anti-Wallarah 2 rally was held on the Central Coast on November 2, with around 400 people peacefully protesting outside the Council Chambers in Wyong.

It was organised by Coast Environmental Alliance (CEA) and spokesperson, Jake Cassar, said apart from the drinking water catchment, the CEA was also concerned about the natural habitat as well as Aboriginal heritage sites in the mining area.

“With deep gratitude for the efforts in the past, especially from the Australian Coal Alliance who are still very active, we need ongoing political action right now that the community can really get behind, ” Cassar said.

“We have been pushing the Liberal Party to reverse its decision and support local farmers and communities, rather than their mates in Korea. “We have also been lobbying the Greens and Labor to continue taking the fight to Parliament and oppose this terrible decision, with the spirit and dedication that is needed to get the government to reverse it.

“The Liberal Government is well aware of the threat to our community’s water supply, that’s why they promised to stop it in its tracks as an election promise, but as soon as they won the election, they bent to the South Korean government backed project and gave them the green light. ”

Another peaceful protest will be held outside Parliament House in Sydney on the morning of November 21, and members of the public are invited to attend the chamber to hear the Bill being debated.