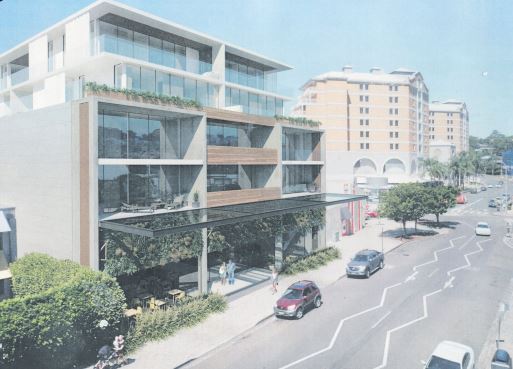 An artist’s impression of the proposed Terrigal development

A controversial $10.7M six-storey development at Terrigal has been given the green light by Central Coast Council, almost 12 months after it was originally refused in December.

The development, which will feature two shops, residential units and carparking on a site in Church St currently being used as parking space for 33 cars, was rejected for a range of reasons including failure to comply with various height, width and setback specifications, fear of setting a precedent and aesthetic concerns over the planned car parking level.

But the project was back on Council’s agenda on October 28 after the applicant requested a review of the decision, with councillors eventually deciding to let the project proceed, rather than risk its chances in the Land and Environment Court if the applicant decided to take that route.

To date, more than 200 submissions have been received on the project, most of them protesting it on the basis of non-compliance and loss of amenity and carparking in the town centre.

But Mayor, Lisa Matthews, said that it was a “damned if you do, damned if you don’t” situation for Council. “The fact is that we haven’t had a great history in the Land and Environment Court and if we were challenged there and lost, we would have absolutely no control over the development, ” Clr Matthews said.

“At least this way we can retain some control and impose conditions. “To deliver for the community, we need to keep control. “The proposal might not be 100% perfect, but it is not unlawful and the staff recommended approval after dong extensive work on it. “If we keep challenging DAs, the Land and Environment Court will eat us up and we have to trust in our staff. “We can’t keep saying ‘not in our backyard’ to developers. ” But the approval was hard won at the October 28 meeting.

Deputy Mayor, Jane Smith, was all for reaffirming the refusal of last December. Clr Smith said the application did not comply with height and floor space ratio under the Local Environment Plan and was non-compliant on eight counts with Council’s Development Control Plan and other guidelines.

“Terrigal bowl is a sensitive area for planning, ” she said.

“Good urban design, good character – that is the role of the DCP. ” But Director for Planning, Scott Cox, said flexibility was allowed in the LEP. Councillors Greg Best and Chris Holstein favoured supporting the staff recommendation for approval rather than possibly forcing staff to argue against their own report in a costly Land and Environment Court battle.

Clr Smith said master plans were meaningless if they weren’t adhered to but her motion for refusal was lost, with councillors eventually voting to support the staff recommendation for approval.

Staff advised in a report to Council that the 23 car parking spots proposed were adequate for the development and the variation to height and setbacks would not adversely impact the amenity or views of adjoining properties.